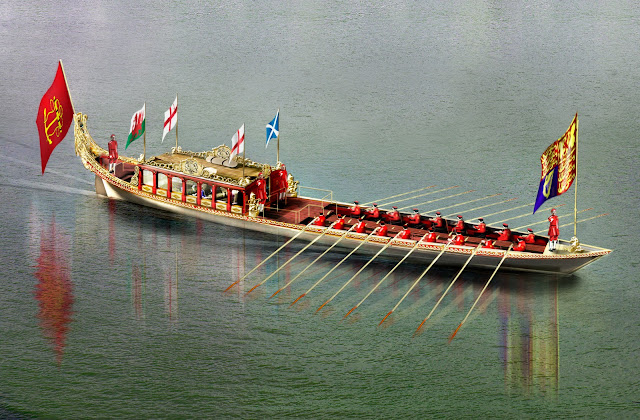 I had a little rant the other day about how nice it would be if Her Maj was rowed down the Thames in a suitable State Barge for her Silver Jubilee Pageant, and now we find that one is indeed under construction.
Gloriana is nearly 90ft long and rowed by 18 oarsmen, 17 of the Royal Watermen and Sir Steve Redgrave.
The boat is gilded from end to end and the carvings include a mermaid and a sea serpent. The planking is sweet chestnut from the Duchy of Cornwall estate owned by Prince Charles. A discreet engine is fitted, which goes against my puritanical instincts but is probably a wise precaution.

The Queen won't be aboard on the day - apparently it will be used for heralds and trumpeters - but it is expected she will use it in future events. The royals will be aboard the specially decorated pleasure boat Spirit of Chartwell.
More on the build process here.
Further details of the procession have been released. It seems that Langstone Cutters' boats Bembridge and Mabel will be in the first section, so we should get a jolly good view of Gloriana.
Posted by Chris Partridge at 09:17

The chartwell is a bit of a disappointment to be honest - something like that would be a lot better.

I got all excited thinking the procession would start in Putney but its actually Chelsea.

@JP in it's current state the Spirit of Chartwell doesn't look very regal but I'm sure when it is revealed nearer the time it will be something our queen can be proud of. The Telegraph has a video which talks about the work which will be done.

Hi Chris,
I'm pleased to see that Langstone Cutters RC will be represented in the QDJP. Norfolk Skiff Club will be there too in Cherub (formerly known as Jojo), so look out for the Norfolk Flag.