The Lore of Punting 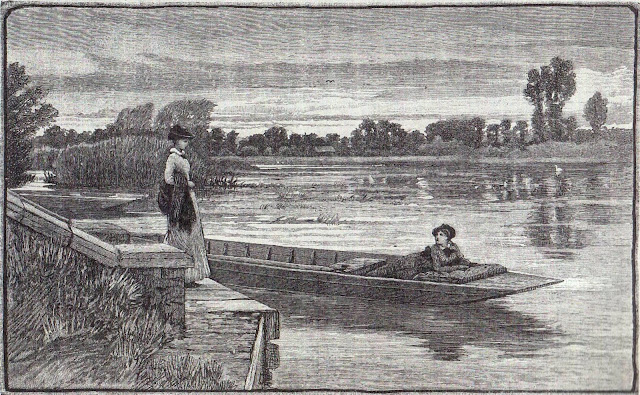 G.D. Leslie compares and contrasts the benefits of punting against rowing at some length in Our River. Punts are the simplest boat you can devise, capacious, agile and easy to push along, he points out.
They are slow, he concedes, but "the person who shoves a punt has many advantages over the rower; the extreme monotony of the work of rowing, after a long spell, becomes very tedious, the hands get blistered, and the body cramped; if you are sculling without a coxswain the constant twisting your neck around to look ahead proves irksome, and if you have a coxswain, it is ten to one that altercations will be continually arising as to errors of the steerer."
Err, I recognise a lot of that, especially about the often fractious relationship between cox and crew. But then Leslie goes on to discuss the finer points of punting in a deep and wide river like the Thames, and gets very interesting.
Rowers may have to twist their necks to see where they are going, but punters are totally blind to the surface that is essential to progress - the river bed. However, there are many hints at the water's edge for an experienced punter.
"When the bank is low and flat, and the edges fringed with sedges, mud is certain to be found, as is the case also where where floating persicaria or water-lilies are seen, whilst round rushes and steep cliff banks generally indicate that the bottom is gravelly and the stream swift," he writes.
When punting upstream it is best to hug the inside bank of a bend where the current is smallest, though Leslie warns of the danger of being dragged out of the punt by low branches, like Absalom from his chariot.
Another tip is that great big holes are often encountered near bridges, where material was dredged out to build the bridge and its approach roads.
Leslie also greatly enjoyed the ability to collect passing flotsam simply by leaning out of the punt and picking it up. He would collect firewood, bottles, old boots even, on one occasion, a 'No Trespassing' sign: "I kept it as a trophy, on account of the dislike I have to these eyesores on the river."
Hear, hear!
Posted by Chris Partridge at 09:07