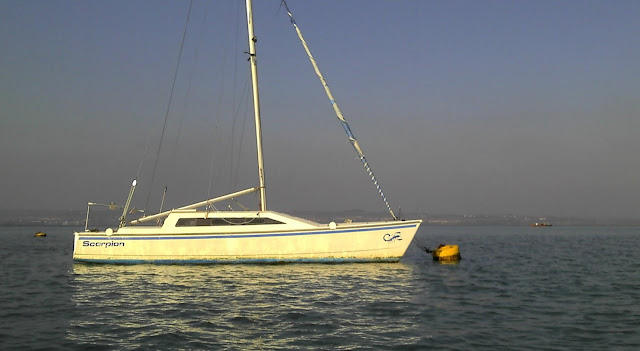 Last Saturday I went out with Langstone Cutters to the Ferryboat Inn at the mouth of Langstone Harbour, which is notorious for its vicious tidal currents. There were nine of us, so we went off in Bembridge (5), Millie (3) and Kittiwake (me). 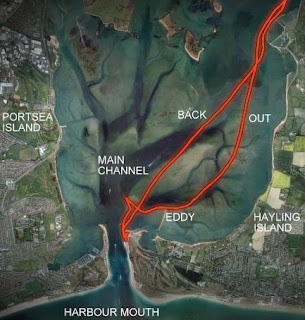 The row down to the harbour mouth was against the tide, obviously. Bembridge took the main channel down (you can see her in the picture above as a line of multi-coloured blobs on the horizon) but I took a curve to the south via a side channel, as you can see in the GPS track. It is a longer route, but the incoming tide forces an eddy down it - look at how the mooring buoy is being driven to the left when the tide should have driven it in the other way. I got an extra few knots that way, and Bembridge saw me draw away ha ha ha.
I was expecting to get to the pub first but got distracted by a bunch of sailors from the Dinghy Cruising Association - you can see the diversion I made to go over and yack about the DCA meeting that evening.

Returning, there were no eddies to exploit so I just hugged the side of the channel to minimise the adverse current. Won by a mile despite stopping for a chat with Sarah Sorensen of the DCAS who was rowing back to Emsworth after paddling round South Binness Island.

Posted by Chris Partridge at 21:46

This appears to have been a congenial outing to a local watering hole, yet you imply that there is some sort of competition to see who arrives first.

There were two boats going in generally the same direction. This is the traditional definition of a race.