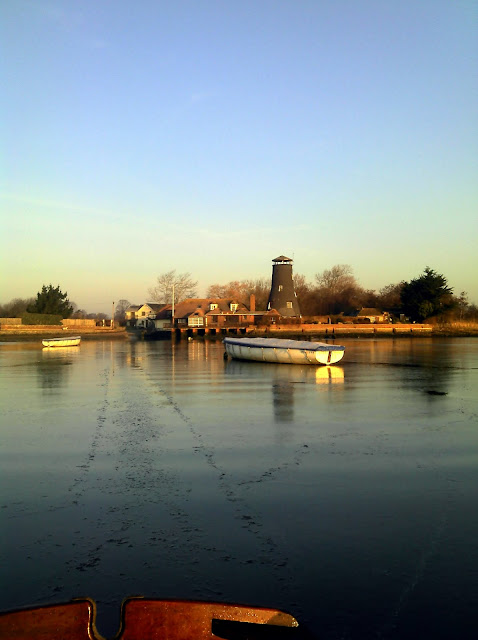 A very early neap tide today so got out in Kittiwake just after eight. It was still and clear but bitterly cold, and the bow crnchd crshsd scrshd through the thin layer of ice. Despite the scale difference, the sound was exactly the same as you hear in the monster ferries plying the Baltic from Stockholm to Helsinki in winter.
I am always surprised at how often the water in the harbour freezes, at least at the edges. It is salt, after all. Apparently, the ice forms on the mud flats and saltings, and the tide floats it off as it come in.

Posted by Chris Partridge at 17:54

Great shot. I experienced a similar day in Kelowna, British Columbia. Okanagan Lake generally doesn't freeze solid and we used to row pretty much year-round out of the Kelowna Rowing Club. One morning we took a coxed-four out and started to hear the sound you describe after about 100 meters - so we had some speed - enough to cause lots of concern as the hull on those rowing shells is measured in millimeters. We managed to back ourselves out of the thin ice in the channel we had broken but we did considerable cosmetic damage to the bow of that boat that day. The ice was gone in about an hour but the memory of that day still lingers.
Patrick Dawson, Ottawa, Ontario