A Thousand Years of Rowing 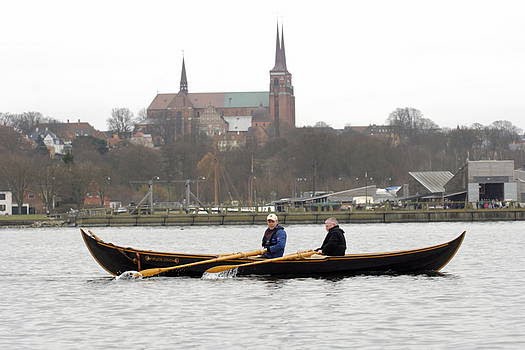 I've been meaning to point to Doryman's Voyage Ethereal blog all week but haven't got round to it. In a couple of posts he covers a thousand years of rowing.
The second post is the first, at least in historical terms. The Gokstad small boat was built in by the Vikings in the 9th century and was part of the burial goods of a warrior king who died in about 900AD.
The Viking Ship Museum in Roskilde, Denmark, makes reproductions of Viking ships and including a new Gokstad small boat for the Danish-Canadian museum in Dickson, Edmonton, Canada.
The process started with buying an oak tree, splitting it into planks and gradually adzing, bending and nailing it into a shape that is still recognisable in boats from Scotland to Sweden today. Fascinating. 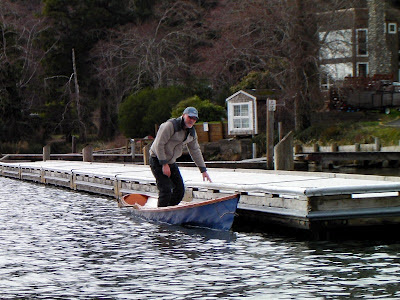 Such a contrast with Doryman's Finesse, a modern, plywood outrigger-and-sliding-seat flyer designed by Ken Bassett as the Firefly.
Doryman has 'detuned' her, installing fixed seats. He had to make some new outriggers and calls them 'underengineered'.
Despite the slight regression from the modern obsession with sliding seats, the average Viking would be unable to see any use for Finesse - until he was invited to race in her. Then the lightness and rigidity of glued plywood construction and the mechanical advantage of the outriggers would speak for themselves.
The sliding seats are only an advantage in sprints, of course. Over distance, fixed seats often win because the rowers don't have to extend their leg muscles to their full extension which is brutally wearing.
Posted by Chris Partridge at 21:20

The rower wants a strong foot brace at just the right angle from the pull of the oars, so that at maximum extension, they can lift their weight off their posterior and into their stroke.
No slider required for hull speed. Let's face it, sliding seats are for young people. (I know you use one Chris, but you're superhuman.)

I consider it an honor to be mentioned on the esteemed RFP.