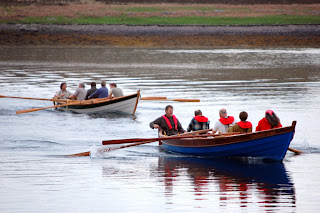 Barely was Ullapool's Ulla in the water when Coigach Lass from nearby Achiltibuie was launched with much ceremony. Ulla was rowed down Loch Broom for the occasion, and of course the very first St Ayles skiff race developed. It was entirely in the spirit of the Scottish Coastal Rowing project that each crew had members of both communities, and that Coigach Lass won. 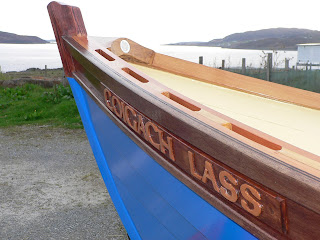 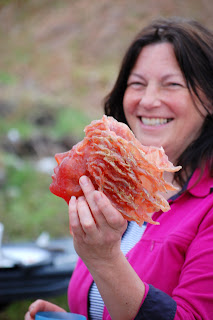 Coigach Lass looks stunning, with vivid blue hull. She has a silver coin embedded in the bow and will have a rather delightful figurehead, which will be cast in metal or resin. She is intended to sit on the stemhead so it can be removed to avoid damage when on the trailer. There is, of course, no suggestion that rival St Ayles skiff crews might regard her as a desirable 'trophy'.
The first St Ayles skiff regatta will take place at Anstruther next Saturday, May 29, when six skiffs are expected to turn out. Should be a great occasion. The Scottish Fisheries Museum will be free to enter for the day as well.
Posted by Chris Partridge at 09:28

Looking forward to seeing the boats in Ireland in the next year or two..

It's not only vikings who use the starboard oar...