Tillerman and Captain JP have spread alarm and despondency in the sailing world by announcing their conversion to (shock!) powerboats.
And I also feel the lure. One of my tenderest childhood memories is swanning elegantly up the Thames in my grandparents' Andrews launch Snarleyow (now you know where the name of my skiff comes from). 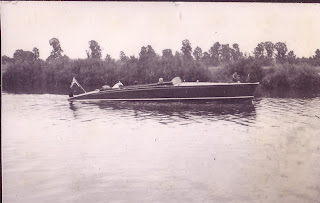 Mind you, we were never, never allowed to open the throttle, let the engine go PHWOAR and roar along drawing a monster wake to remind lower forms of river life such as rowers, sailors and canoeists who was boss. The boat had been bought from the American comedian Red Skelton who had been banned from the river for life for just that sort of behaviour. Even with the tedious speed limit, whenever I got behind the wheel they had to prise my hands off with a crowbar.
That's Pops driving when he got the boat in 1949. Behind him is the ruler of the family, the famous Staffordshire bull terrier Piggy.
Posted by Chris Partridge at 17:45