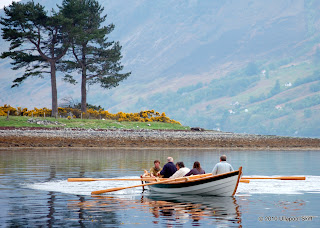 It is truly amazing how fast the Scottish Coastal Rowing project is getting onto the water. Ulla, built by the community of Ullapool on Loch Broom, is in her element and boy does she look lovely.
And she couldn't have fabulouser surroundings as Chris Perkins' dramatic pictures show.
One of the difficulties with double-enders is that the rudder is inevitably miles away from the cox, necessitating either bits of string or long spindly tillers (or, even worse, push-pull arrangements which are a recipe for misunderstandings and disaster). 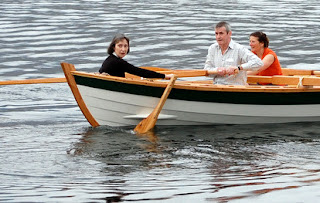 The Ulla builders, which include such luminaries as Topher Dawson, Adrian Morgan and Chris P, have resurrected the steerboard, adapted from an idea by the Vikings. The rudder is mounted to the side of the cox on the gunwale and a sponson lower down - the Vikings used the rootball of a small tree to provide the natural flexibility and strength. The steerboard was always on the right of the boat, giving rise to our term 'starboard'.
Apparently, the steerboard works well. It will be interesting to see if other crews follow the Ulla way. 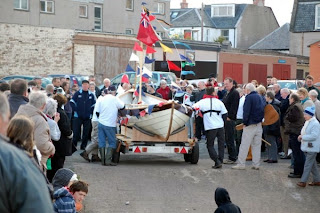 For some reason I missed the launch of the Port Seton skiff Boatie Rows, which was launched a couple of weeks back to much piping. A video of the event is here.The rowing is....err...crablike...but it was the first time out. Having demonstrated the will to succeed by building the first boat to hit the water, Port Seton will evidently be a force to reckon with in the upcoming regatta season.
Posted by Chris Partridge at 23:30

The first photo is beautiful.

Boatie Rows, once they sort out the lengths and looms of their oars, should do brilliantly. I can tell it was the first time any of them rowed other than alone or pairs. Bow oar might be longer, snug the rowing position over to the larboard, or drill and plug-weight the oar. I have rowed with awkwardly balanced oars (sculling): went home, changed the collar outboard 4 inches to lengthen the loom distance, and suddenly turned into an expert.