Racing in Paris and Hamble 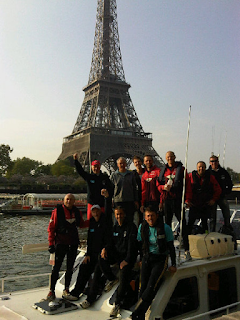 The London2Paris Challenge climaxed early this morning, with the Gravesend/Medway/Langstone crew first across the line followed by Reivers12 and the Outloars. It was an eventful race, brought to a sudden halt in Herne Bay when horrible weather howled in. Gravesend's boat was swamped.
The boats were recovered and the expedition bussed to Le Havre to restart the race up the Seine. At this point, the organisers started a very strange system of pursuit races, imposing massive handicaps on the faster crews. Gravesend managed to overcome this, rowing to victory in several stages despite the handicap. At the end, the Outloars, the slowest boat, won the pursuit section and Gravesend won the overall championship.
My sympathies are with Rievers12, who came away with nothing despite being second.
Anyway, congratulations to all the crews, who all rowed the same distance in a gruelling event and came out with credit. And particular thanks to Mike Gilbert and Colin McPhee for letting us know what was going on through their Twitter feeds. 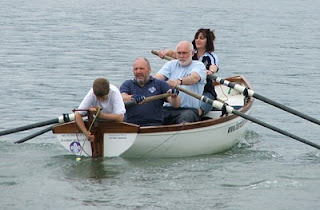 I took part with fellow Langstone Cutters Mark and Jenni in the Hamble River Raid, a distance of just four miles, and we came away with the prize for the oldest crew in the race - despite the fact that our cox, Nick Hands, is just 11. This picture, which I have fearlessly stolen from Max Taylor's Bursledon Blog, shows us starting out.
Posted by Chris Partridge at 22:11

Chris, May I opffer a slight correction to your blog? "At this point, the organisers started a very strange system of pursuit races, giving the slowest crew a massive handicap. " The handicapping system meant the fastest over the water were given the handicap with the slowest starting first. So on the 1 non-tidal leg of the race Gravesend started 34 minutes after the slowest team and the Reivers12 26 minutes (I believe) after the slowest.... so to win the pursuit legs the Gravesend boys had to row like stink! Gravesend won the Fastem Time overall trophy and the Pedro Boats sprint trophy for thelast leg. All in all the handicapping system is, in me personal opinioni, a farce, and very unfair as rarely do the boats all finish the leg together... someone's calculations being way off! It does seem very odd to me that the slowest team of rowers in the challenge can walk away with the pursuit trophy and the team that were second fastest get nothing!! But ehy ho.. the best rowers I believe one the most important trophy
Steve S

Thanks for that, Steve. That was exactly what I meant to say - I'm going to do a bit of judicious editing now....