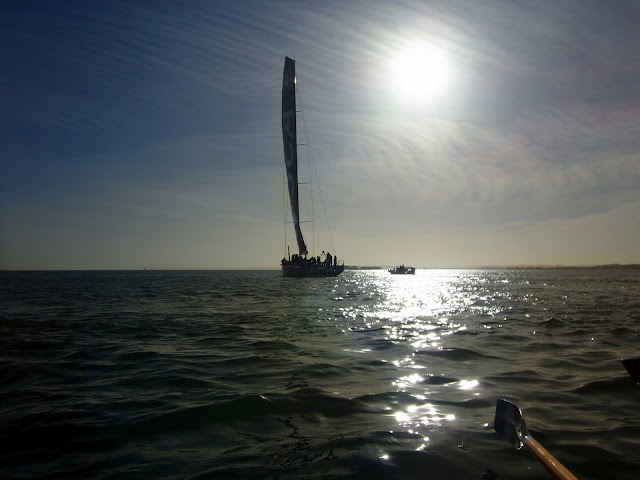 I've come to the conclusion that Langstone Cutters' new pilot gig Heart of Hayling is a lucky ship.
She attracts good weather. 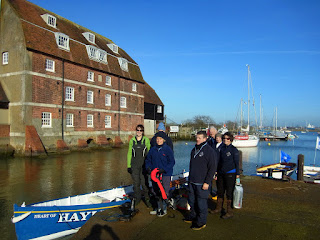 Last night was a stinker - a front passed through bringing Force 5 winds and lots of rain. Another front is due any moment now.
But in between, Heart of Hayling crossed Southampton Water from the Hamble to Ashlett Creek in glorious sunshine and light breezes. The picture shows the crew with the old tide mill behind.
It is the third time I've taken her out in unseasonably fair weather after days of rawcoldgreywet horribleness.

The launch of the Gig Club was held in balmy sun after a week of rain, which I now attribute to Heart of Hayling's beneficent influence.

Even the Snow Row put smiles on everyone's faces.
Especially mine. 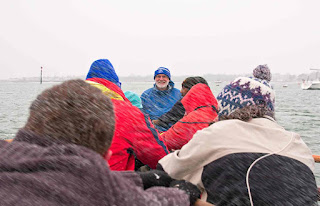 Posted by Chris Partridge at 20:13 No comments: 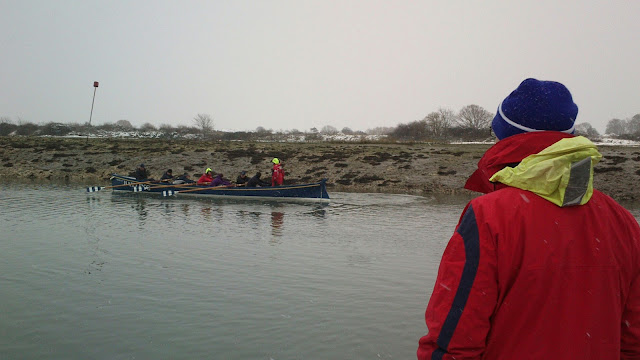 Turning up at the slipway with the boat, the crew, the oars, the beer money and no rudder is acutely embarrassing but surprisingly common. We did it at the Cowes crossing a few weeks ago (assumed it was in the back of Mabel when it wasn't) and someone had to schlep back to fetch it. 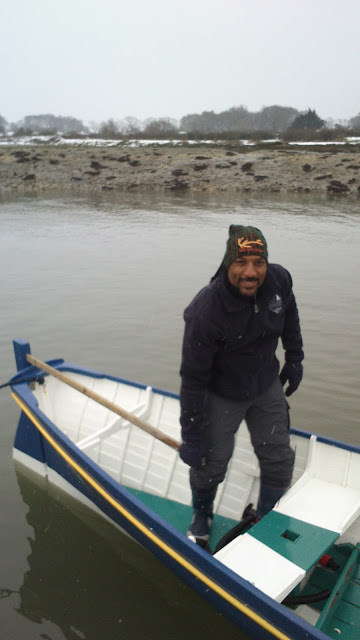 Last year Langstone Cutters went all the way to Venice to discover on the pontoon that they had left the rudder of one of the Teifi skiffs at home. They lashed up a rudder from some bits of wood that were lying around and some screws that seemed to have become somehow detached from the deck of the pontoon. It was not a thing of beauty but it worked.
Today, I brought our pilot gig Heart of Hayling to the marina only to find that the yoke that connects the steering lines to the rudder had gone missing. Disaster!
One of our members rootled round the undergrowth and found a bit of wood that slotted nicely into the rudder, forming a rather good tiller.

However, we never got the chance to try it out because the bloke who had taken the yoke home to fit new steering lines turned up before we could cast off.
A pity really - it would have been interesting to see how well it worked.


Posted by Chris Partridge at 21:36 No comments: 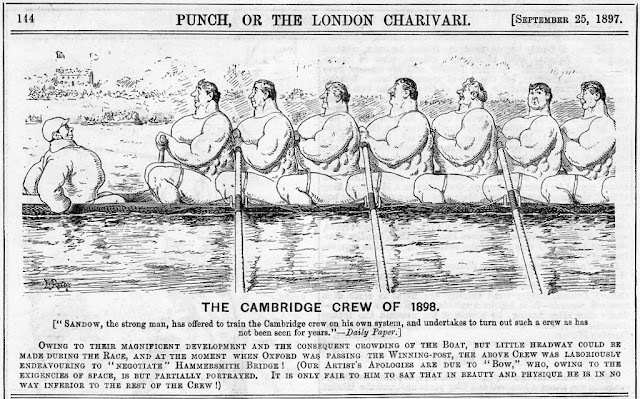 Hear the Boat Sing has this splendid cartoon today, showing what a heavy eight might look like if trained by the man who invented bodybuilding, Sandow the Strongman. Even the cox is a muscle-bound bruiser.
Posted by Chris Partridge at 16:44 No comments: 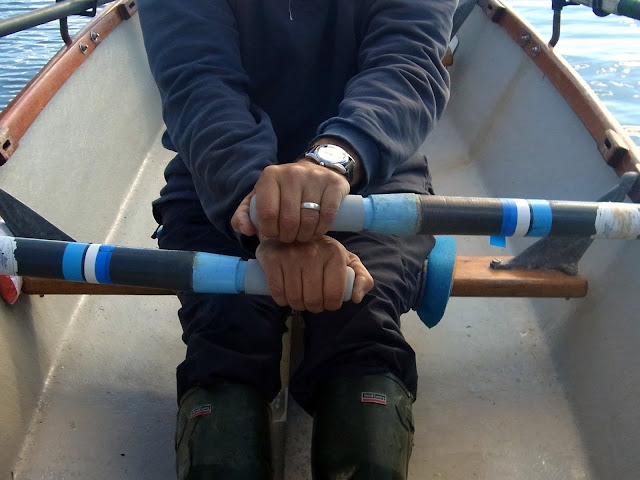 It is surprisingly difficult to change how you row. Recently, one of Langstone Cutters' Teifi skiffs was provided with a couple of pairs of carbon blades and people are only just getting used to them. This is mainly because of the considerable overlap compared with our wooden oars. 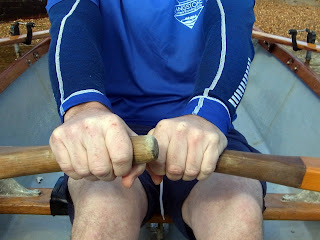 Yesterday I took the boat out with Damian, the guy in the picture with the monster tanker in the last post. He started to adapt to the very different style of the carbons, and we both had to learn another skill - rowing coxless.
I have lots of practice sculling on my own and with a cox, but almost none in a double without a cox. What makes it really difficult is the way a breeze weathercocks the boat, bringing it to lie abaft of the wind. This behaviour is particularly marked in the Teifis which have a strong sheer with high bow and stern.
The normal system for coxless rowing is for stroke to set the stroke and bow to steer, because bow has a better view forward. Unfortunately, in a cross-breeze this means that bow has to row like fury with one oar to keep the thing even approximately on course.
Eventually we worked out that the secret is cooperation. Damian in the bow would get is pointing in the right direction and then choose a landmark behind the transom. Then we would both steer to the mark.
Suddenly steering became much easier. Because we were both aiming for the same mark, we were working together and not steering against each other. Easy peasy.
I bet all coxless pairs are taught this on their first row out but it was a revelation to me.

Rowing across the Solent 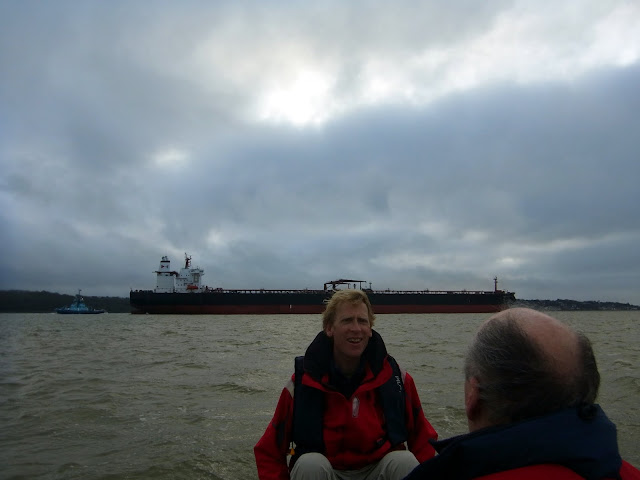 I rowed across the Solent yesterday in Langstone Cutters' four-oar skiff Mabel, for a pub lunch at Cowes. On the return leg, we nervously watched as a black hull on the horizon got larger and larger with alarming speed. You don't really appreciate just how much faster a ship is than a small rowing boat until you are in the path of one. It's like playing chicken with the juggernauts on the motorway.
Well, as you can see we just got stuck in and the tanker passed safely astern, along with the blue tug behind that helps her steer round the sharp right-hander into Southampton Water.
But it could have gone very horrible: 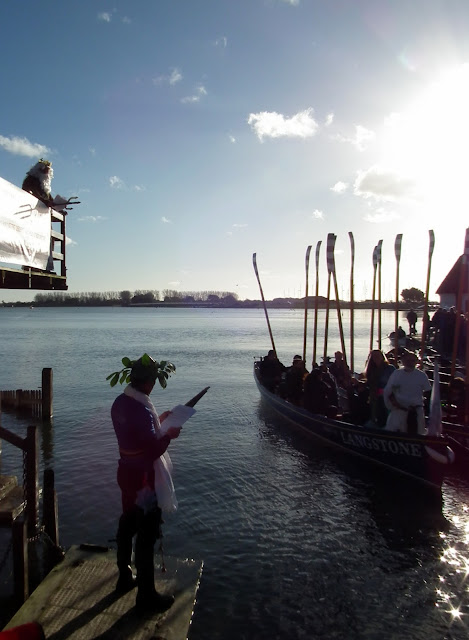 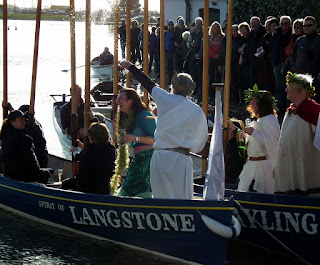 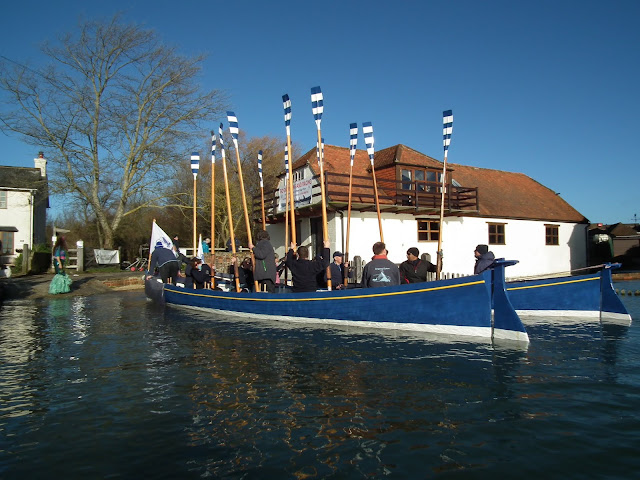 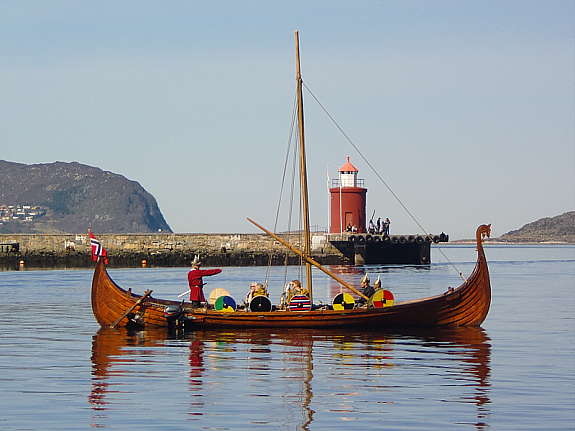