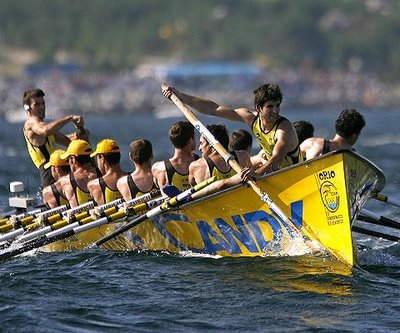 Ben Crawshaw at The Invisible Workshop has a couple of fabulous pics of the amazing Basque trainera, developed for anchovy fishing but now raced. There are 12 oars and steering oars in the stern and, unusually, in the bow as well. The bow man rows when not steering. 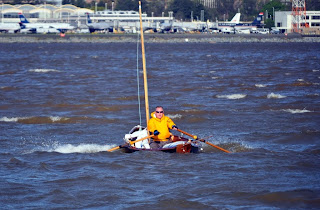 Fire Captain Neil Calore is rowing from Washington DC to New York in the Voyage for Autism Awareness, using the Intra Coastal Waterway, rivers and canals and stopping at waterside Fire Service facilities. He is approaching Philadelphia - three cheers, Neil! 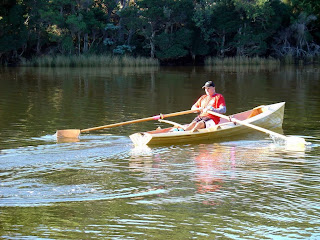 I have been meaning to post this picture for some time. Drosso in Tasmania built this lovely strip plank coastal sculling boat in huon pine.
And finally, a Salute to the Royal Couple courtesy of expat Scot Grum of Port-na-Storm:

Posted by Chris Partridge at 08:34 No comments: 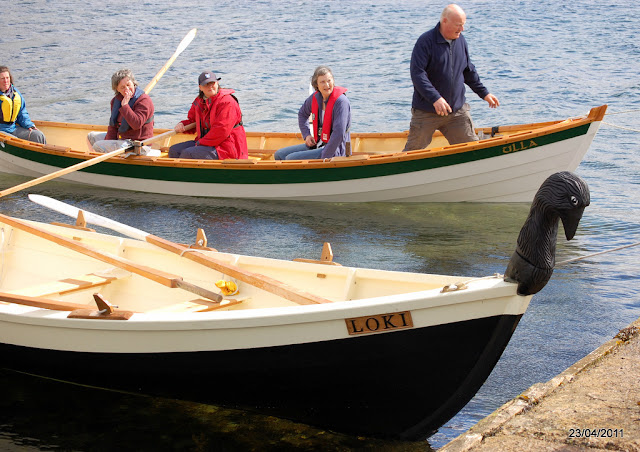 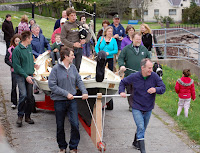 The launch of Loki, the St Ayles Skiff built by members of the Loch Broom Sailing Club, means Ulla and Coigach Lass now have some local competition, which they clearly relish.
Loki is immediately recognisable by the dramatic and rather lovely bird  figurehead, although it is unclear what it has to do with Loki, the Norse shape-shifting god who is recorded as assuming the appearance of a fly, a salmon, a seal and a mare - versatile, but not birds.
Thanks to Chris Perkins for the pictures. 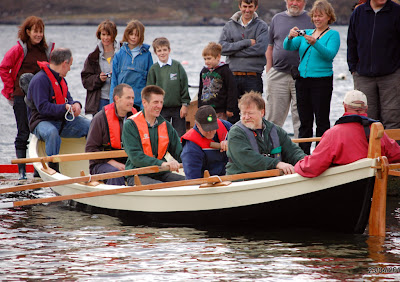 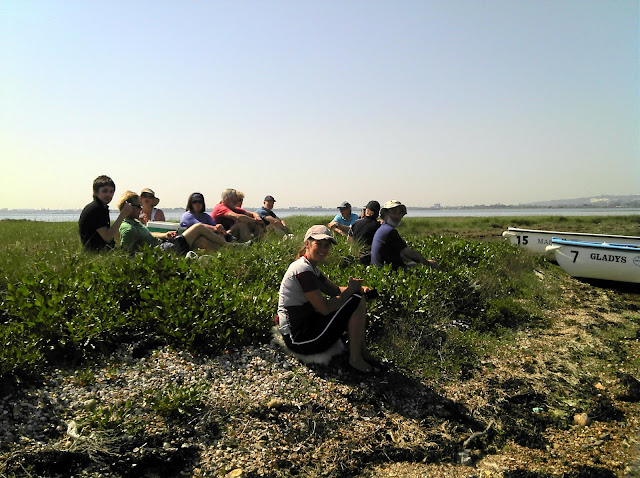 Skived off this afternoon, went for a picnic with Langstone Cutters at the landing place on Long Island, part of the bird reserve. Weather was perfect. More pics here.
Posted by Chris Partridge at 20:50 No comments:

St Ayles Skiffs go on Forth and multiply 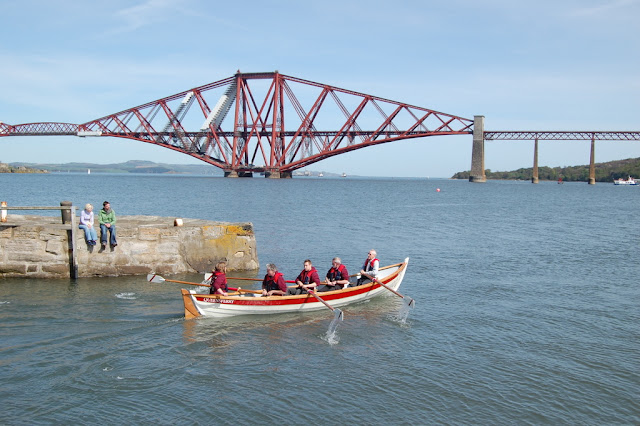 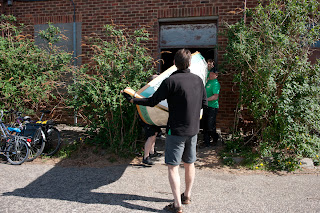 St Ayles Skiffs seem to be arriving on the water in droves. Last weekend another two were launched, Queensferry's Ferry Lass and Portobello's Jenny Skylark (right, being carefully manhandled out of the workshop).
The prototype skiff Chris O'Kanaird was returned to the water with the storm damage repaired.
There is a nice video of the Portobello launch on STV.
Posted by Chris Partridge at 21:43 No comments: 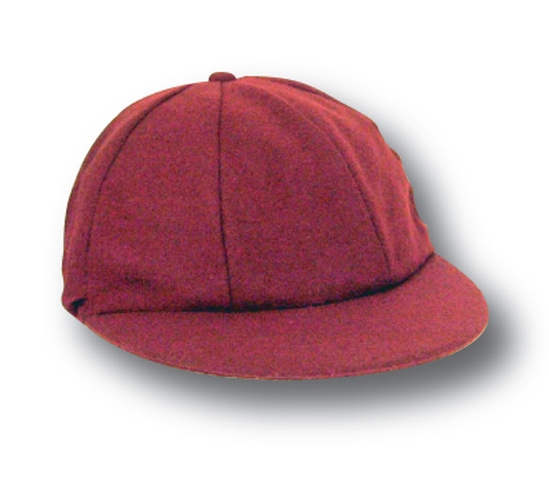 Cloudless skies and light refreshing breezes made rowing memorably wonderful over the weekend. But I need a new sun hat.

I used to have an excellent sun helmet that I bought in Brookstones in Atlanta, Georgia. It was a sort of solar topee made of a light plastic mesh that kept the sun off while allowing the air to circulate and cool the bonce. It was the best sun hat I have ever had, but unfortunately it was lost over the side while sailing last year and I have been unable to locate anything similar since.
Big floppy sun hats with a wide brim fly off into the water in any wind, and baseball caps are for dorks, as can be easily seen in this ghastly picture.

The most stylish headgear for the rower is a traditional English cap with a narrow peak (above) but they are made of wool and are far too hot.
What I want is a baseball cap styled to look like a proper rowing cap. Where can I get such an article?
Posted by Chris Partridge at 17:31 2 comments:

Rowed to Emsworth this morning for a sustaining and nutritious fried breakfast. So far, so sane.
Then coxed Reivers12 in their new pilot gig. The other Reivers12 crew, in the Clayton skiff Gladys,  went aground on the mud. Their cox had to get out and push them off as we came up, chortling. I got a nice pic.
Later, outside the harbour mouth, I steered the gig onto a sandbank and had to get out and push them off. Luckily, because I was the one with the camera, no record was made of this event. It never happened.
Posted by Chris Partridge at 21:41 No comments: 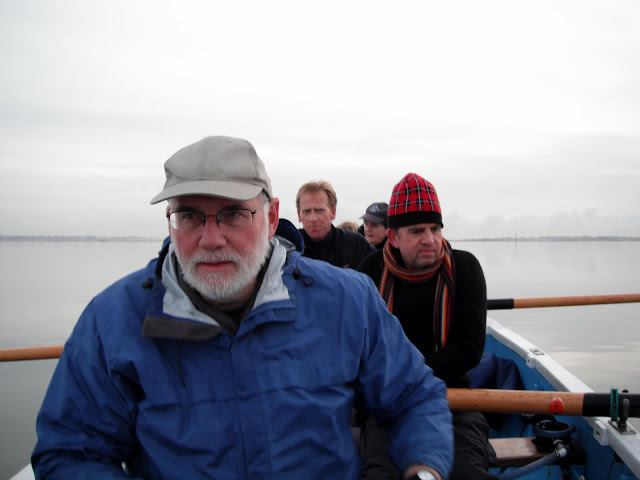 Tomorrow I go rowing with Langstone Cutters at practically dawn, to Emsworth for breakfast. And in the afternoon I am going with Reivers12 for a training session and I'm not even doing the event. And it's Club Rowing on Sunday, of course.
I think I may be deranged.....
Posted by Chris Partridge at 21:53 2 comments:

A Robote in the Lake District 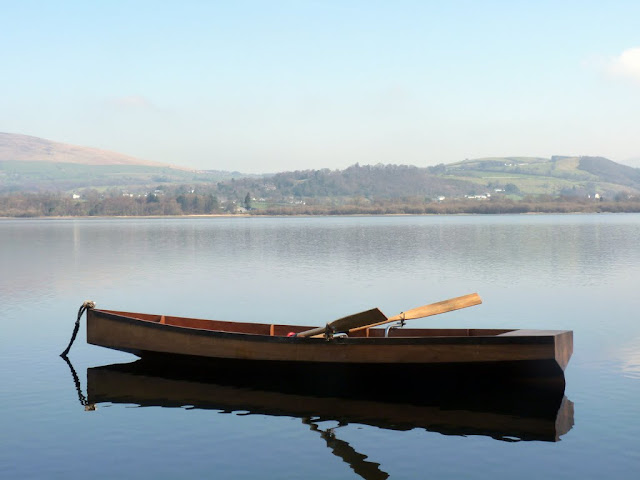 I've always admired the designs of Jim Michalak for their complete functionalism, simplicity and ease of build. Some of them ain't pretty, but that's not the point.
Jonty Chippendale, one of the victims of the dreadful Cockermouth flood, started rowing again recently, taking his Michalak-designed Robote out on Bassenthwaite Lake. He writes:


This is a picture of my Jim Michalak designed ‘Robote’. Its surprisingly quick and very easy going, can handle a fierce chop without getting me wet, and is light enough to car top single handed – at a push.
This day I had just rowed the length and back of Bassenthwaite Lake (the only lake in the Lake District for all you quiz fanatics!) a distance of about 6 miles. In fact I did more as it was such a beautiful morning I did a couple of extra miles afterwards just pottering around watching the bird life. Later in the year we have Ospreys feeding on the lake, but you can only do so much neck craning when rowing a brisk 6 miles, so I have yet to see one in the act of fishing!
I also have a recreational sliding seat scull which is much quicker but significantly less stable so even less suitable as a sight seeing platform.
I have a mind to use the Robote for a camping/cruising holiday, I just can’t decide where. Any suggestions – not to crowded and with quiet places to lay up for the night. Oh and NO MIDGES so that rules out Scotland and Ireland in the summer!
Enjoy the blog,

Well, Jonty, if you can bear to come down to the soft south you could look at the events the Home Built Boat Rally are organising, including our row down the Thames following the Beale Park Boat Show, and the Dinghy Cruising Association's Cobnor week, a brilliant camping week with access to some of the loveliest rowing waters anywhere.
Posted by Chris Partridge at 22:18 4 comments: 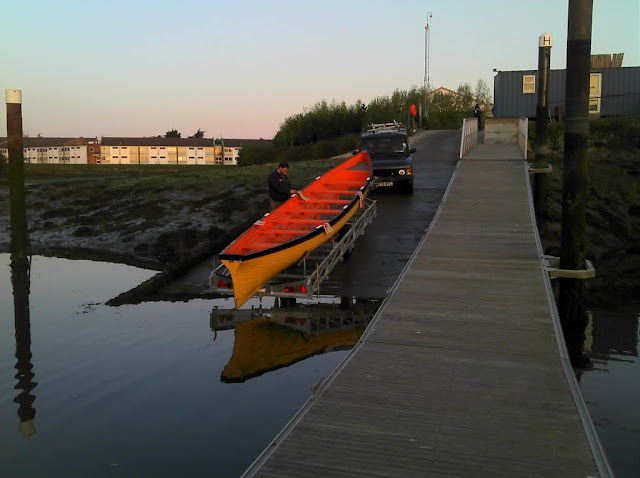 I've always wondered exactly what Samuel Pepys meant by 'betimes', as in 'Up betimes to the Duke of Albemarle'. If he meant 'at half past five in the bloody morning', I was up betimes to Hayling Island today, to join Reivers12 in their new pilot gig.
The gig is a stunning creation in bright yellow plastic with orange interior, and the Reivers will row her from London to Paris and back next month. She is fitted with holes for the traditional thole pins, but the Reivers are wisely using crutches instead.
We took her out under a cloudless sky and she rowed very nicely indeed, though the oars are clearly a bit short. A new set is on the way, apparently.

Posted by Chris Partridge at 11:44 No comments:

Another Sprite hits the water 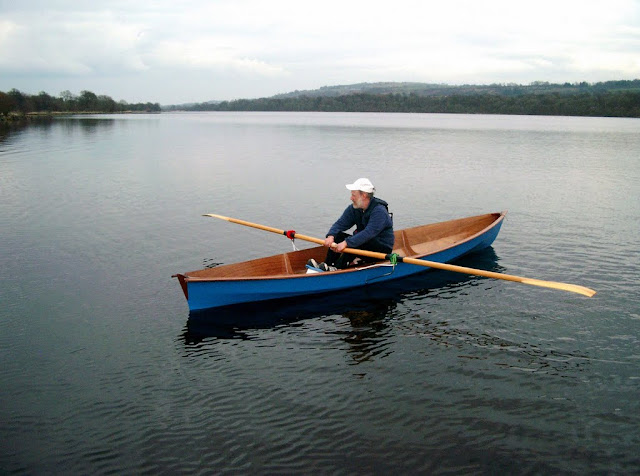 Stewart Hendry has emailed some pictures of his Chippendale Sprite, the boat that has given me a huge amount of fun over the last few years and is pictured on my masthead. He writes: 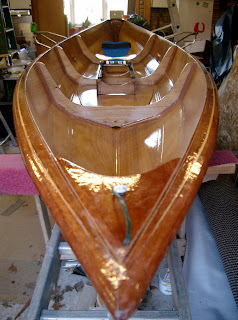 Hi Chris
I've been reading your blog for some time now. I recently finished a Sprite and had her in the water for the first time two weekends ago. I was amazed at her turn of speed, though she requires some tuning. I will have to move the footrest forward (might need a mod). The oar handles were hitting each other, so I've moved the green and plastic stops, they are now nearly off the ends of the collars. Checked distance between rowlocks, comes out at 4ft 7in, according to the instructions should be 4ft 8in. I'll let you know how I get on and send you some better photos when the sun comes out up here.
There's a gent from Skye planning a transatlantic row. He was going to depart from New York this June however postponed it for a year due to financial problems.
All the best
Stewart

Thanks Stewart - it's great to see another example of one of my favourite boats on the water, and you have done a great job on her!
Many scullers, including myself, prefer to cross the handles - the conventional way is to pass the left hand over the right. I have set my blades so my hands cross on the return but the handles just miss each other on the power stroke, so it is easy to pull one oar past the other to change direction.
It is a shame Niall Iain has had to postpone his transatlantic row on the toughest route there is, but here's hoping he makes it next year.
Posted by Chris Partridge at 23:04 4 comments: 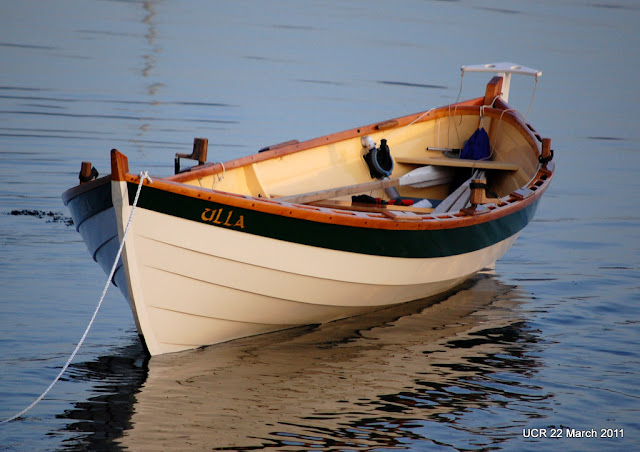 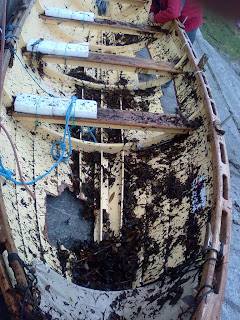 The Ullapool St Ayles Skiff Ulla is back on the water, looking better than ever thanks to innovative repairs by Topher Dawson and lots of sanding and painting by Chris Perkins. What a great sight.
Posted by Chris Partridge at 22:44 2 comments:

Monument to a great oarsman 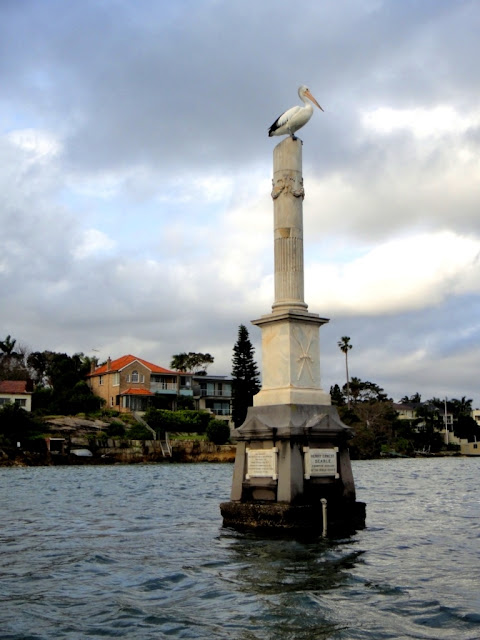 Over at that excellent rowing blog Hear the Boat Sing, they have been celebrating the magnificent monuments that used to be erected to famous oarsmen, including my favorite, the tomb of Robert Coombes in Brompton Cemetery in London.
One detail was missing however - the inscription on Henry Searle's column in Sydney, which curiously stands in the middle of the Parramatta River. It is a broken column, a common symbol for a life cut short. The blog appeals for someone with a boat to get a closer look.

Peter Miller was ready to oblige, and sent these great snaps - I love his panoramas.
He writes:


"I know the monument well and pass it twice a day on the rivercat on the way to work. In November I fulfilled a long held ambition to partially commute by boat. I rowed from Cabarita on Parramatta River to Cockatoo Island on the Harbour, stored the boat there and went the last few kilometres by ferry. I did the whole thing in reverse on the way home and it was a lot of fun - quite impractical but fun.
On the trip I took these photos. There appear to be three plaques on the monument. The southern plaque says "Henry Ernest Searle Champion Sculler 1888-9". The western plaque says something like 'This monument was erected by public subscription by [an Australian MP]'. I cannot make out the rest."

Next day, Peter took his SLR with a long lens with him on the ferry and snapped the eastern plaque, which reads: "Born 14 July 1866 at Grafton NSW"
Henry Searle was World Champion Sculler for just over a year, having won the title in Sydney in 1888 and successfully defended it on the Thames in 1889. Tragically, on the way back to Australia he caught typhoid and died aged just 23. Today, his monument is the traditional finishing post for racing on the Parramatta.
Posted by Chris Partridge at 22:38 No comments:

Rowing up the River Test 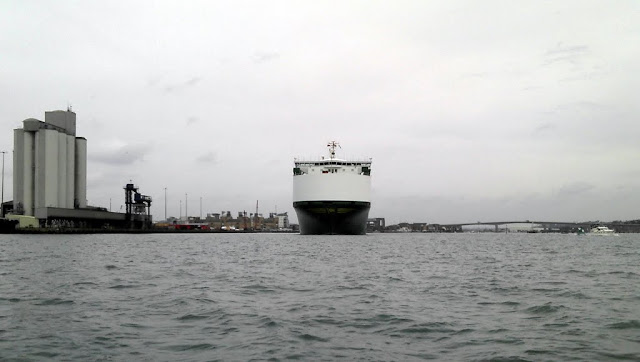 This was one of those 'gulp' moments. I was coxing Gladys, heading for the River Test in Southampton today. We passed a huge car transporter with a tug holding a hawser at the stern but she was still held to the dock by several enormous cables so we assumed she was going to sail at high tide in about an hour. 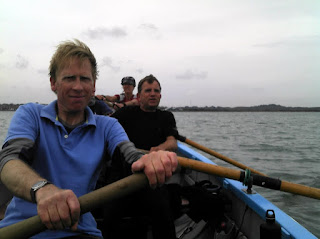 A moment later, I glanced over my shoulder and saw the the ship bearing down on us at increasing speed. We skidaddled.
It was a great row, hard work up the Test into a brisk northerly, but easy back with the tide after a couple of excellent and cheap pints of bitter at the charming and welcoming Eling Sailing Club.
Had to stop at the public loos on the way back, of course, and got there only just in time. A notice said 'these conveniences will close on April 4th. Southampton Council is working hard for replacement services as soon as possible."
Right. I bet they are.

Posted by Chris Partridge at 20:24 No comments: