The Navy arrived in Chichester Harbour today, in the form of Acorn, possibly the first ever Cornish pilot gig to sail under the white ensign.
The plastic gig, completed in navy blue (of course) with a white gunwale, has been bought for use by trainees at HMS Collingwood, the Navy's training establishment and said to be the largest training orgaisation in Europe. HMS Collingwood is a stone frigate, a bricks-and-mortar establishment on shore, but still called HMS in accordance with tradition.
Called Acorn, the gig is kept at Whale Island in Portsmouth Harbour but will be appearing in Chichester Harbour fairly often, I believe.
Acorn was taken out for a spin by members of Langstone Cutters Gig Club, who said she moves well through the water.
A great addition to Britain's Navy. And despite the latest round of defence cuts, another is on the way. 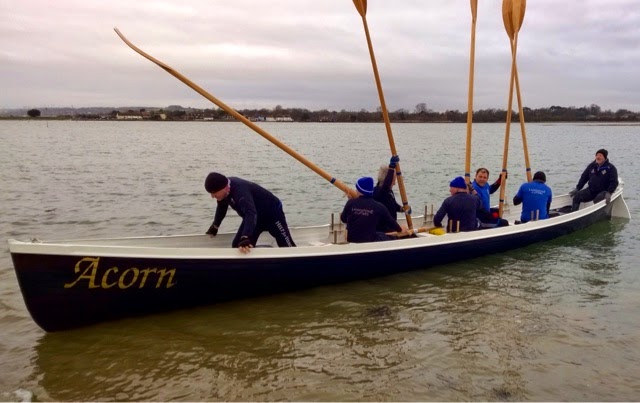 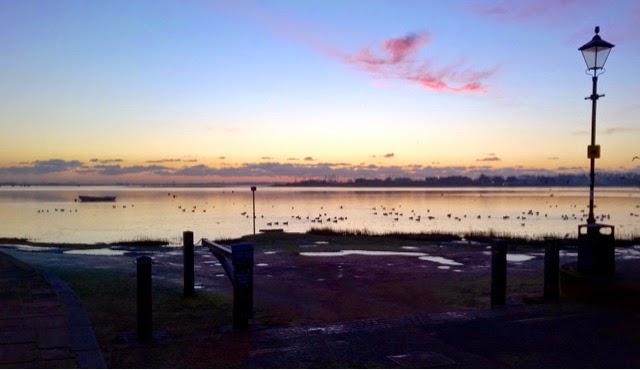 An early tide meant a dawn start today. Geese everywhere. But it was just Les and I came along, though the gig club over the water filled three boats with dads who have to ferry their kids around most Saturdays.
We rowed to Emsworth for coffee. It started to rain just as we left but happily only a spot. The real rain came down on my way home. So we got away with it again.
Posted by Chris Partridge at 16:11 2 comments:

Nobody drownded but there was a wreck (nothing to laff at!) 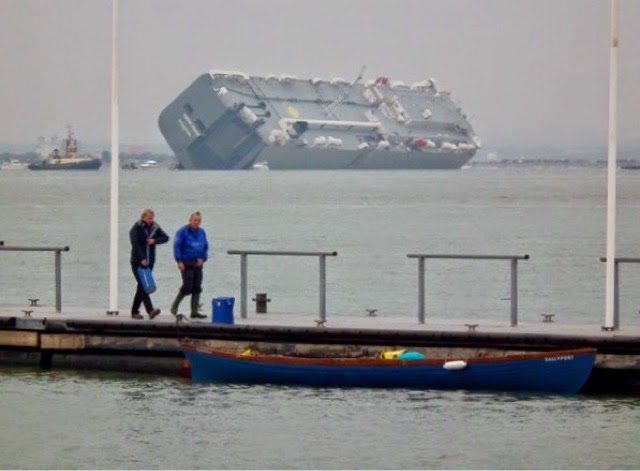 Langstone Cutters' annual winter row to from Lee-on-the-Solent to Cowes was enlivened by the wreck of the humungous car transporter Hoegh Osaka on Bramble Bank. Apparently she started listing as she steamed down Southampton Water and was deliberately beached to stop her turning turtle.
We didn't row any closer because it would have meant fighting the ebb tide all the way and it flows fast  when it gets going. And anyway I had queasy recollections of the last time I got a too-close look at the Hoegh Osaka three years ago: 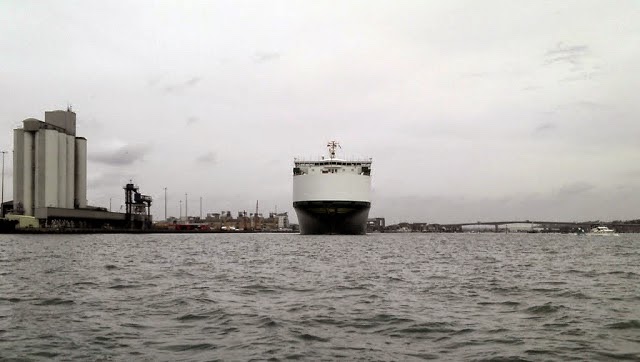 We had just rowed past her and were turning right up the River Test. I looked round to see she had slipped her lines and was already approaching at an alarming rate. A hundred hard and we were out of her way. Phew.
Coming back from Cowes yesterday we took care to avoid these guys. Even at this distance they look threatening: 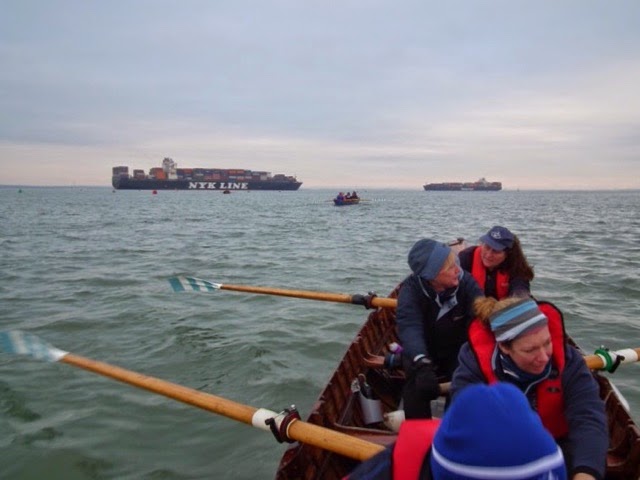 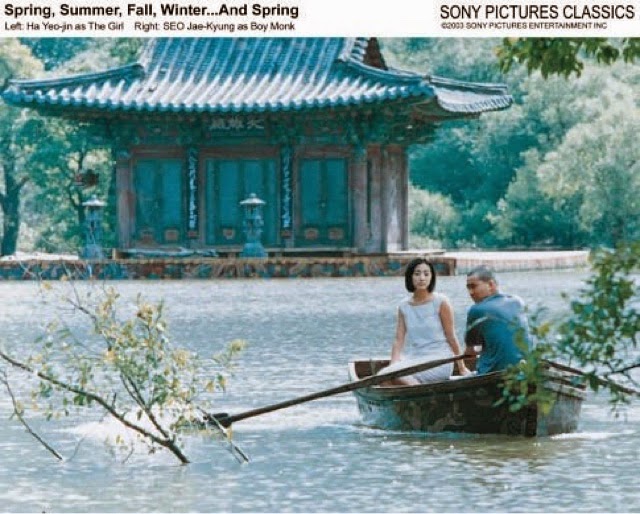 Kim Ki-Duk's film Spring, Summer, Autumn, Winter...and Spring is one of the very few movies where a rowing boat provides one of the symbolic threads that runs through the plot.
A Buddhist monk and a boy novice live on a monastery that floats on a lake deep in the forest in Korea. The monastery is tiny, just a raft with a small temple. They use a little punt to ferry visitors from a gated jetty on the shore and to visit the banks of the lake to forage for food.
The boat is the instrument of temptation in the form of a girl brought to the monk to be cured, fate in the form of detectives seeking the novice and finally death as the old monk transforms it into his own funeral pyre.
The movie is full of Buddhist symbolism that I had to look up afterwards (thank you, Wikipedia!) but the role of the boat is not specifically Buddhist (at least, it isn't mentioned in the Wikipedia article). But it is the boat that transports each protagonist from one stage of their lives to another.
It is a great work of art, moving, illuminating and stunningly beautiful.
Warning: some sex (a long way away but leaving nothing to the imagination) and some animal cruelty.
Posted by Chris Partridge at 21:22 1 comment:

I have been shockingly badly educated. At the age of erherm and a half and I have never seen the Wizard of Oz all the way through. The other day I caught the opening sequence for the first time, including the disturbing and bizarre twister that whisks Dorothy up to the Land of Oz.
On the way up she passes a boat being rowed by a couple of cheery coves who doff their bowlers politely. Apparently this is a reference to a number sung by the Scarecrow and the Tin Woodman called Hurrah for Baffin's Bay, from the 1903 Broadway musical of the W of O.
The lyrics are passing strange (and you can listen to the original 1903 recording here):

'Twas on the good ship Cuspidor
We sailed through Baffin's Bay;
We tied her to the ocean
While the Bulwarks ate some hay.
The Captain said "We'll tie the ship,
Whatever else betide!"
And he drank a pint of gasoline
With whiskey on the side
He had lost his breath
But soon it was restored.

It was midnight in the galley,
It was one beside the dock;
But by the starboard watch
'Twas only half past nine o' clock.
The first mate said, "Unhitch the mules,
We're going thro' a lock!
And then the bo'sun went
And put the larboard watch in "hock!"
For the good ship didn't
Have a cent aboard.

The bo'sun asked the polar bear
Would she eat off his hand,
But polar bears talk Polish
And she did not understand.
She chased him up a mountain peak;
She acted very tough--
When she made him jump the precipice
He knew it was a bluff!
But if she had bit him
He'd have bit her back.

Two loving whales got in our net,
We knew they were insane
They blew themselves,
And then we saw,
They'd water on the brain.
The bull whale said "Soapine,
I love you best of all the whales."
The lady said "Don't talk so loud--
The fishes carry tails!"
And the bull whale kissed her
With a fishing smack.

Posted by Chris Partridge at 19:55 No comments: