A great tale of rowing on the Merrimack in Massachusets is at Duckworks Magazine this week, told by Josh Withe.
In the first, he goes upstream in winter, circling an island and taking the nine knot ebb tide on the way back, to be caught in a snowstorm: "Within seconds I was rowing in the center of a snow globe, the only sound was the steady creak of the oar locks and the splash and drip from the blades."
In the second, he rows with his sister downstream towards the river mouth with another boat (pictured) and gets caught when the wind gets up. He tows the boat back through the shallow water.
Ripping stuff!
Posted by Chris Partridge at 20:23 No comments: 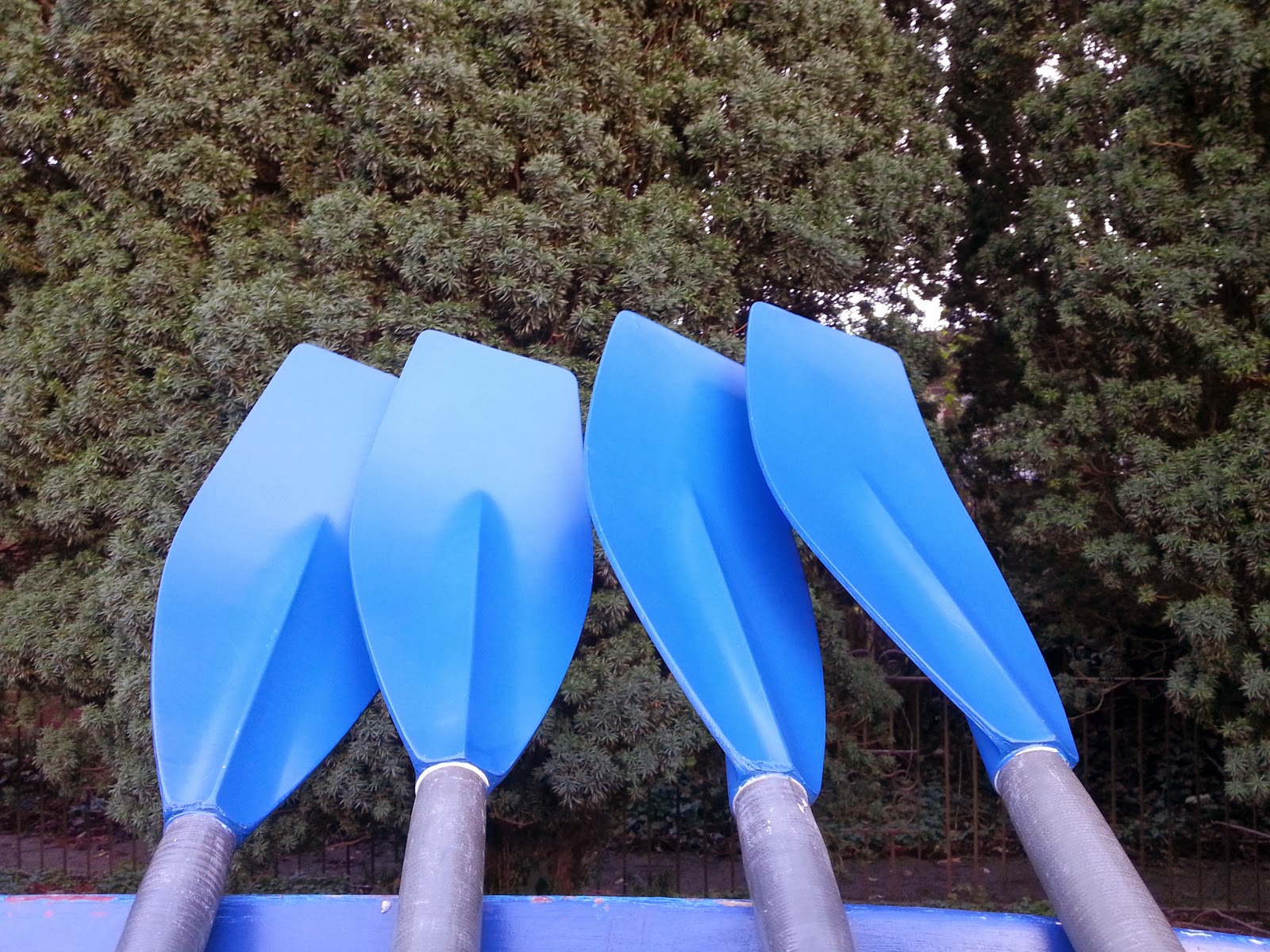 The carbon blades are repainted. The rough black finish has been replaced by a glowing blue. I'm rather pleased with them. 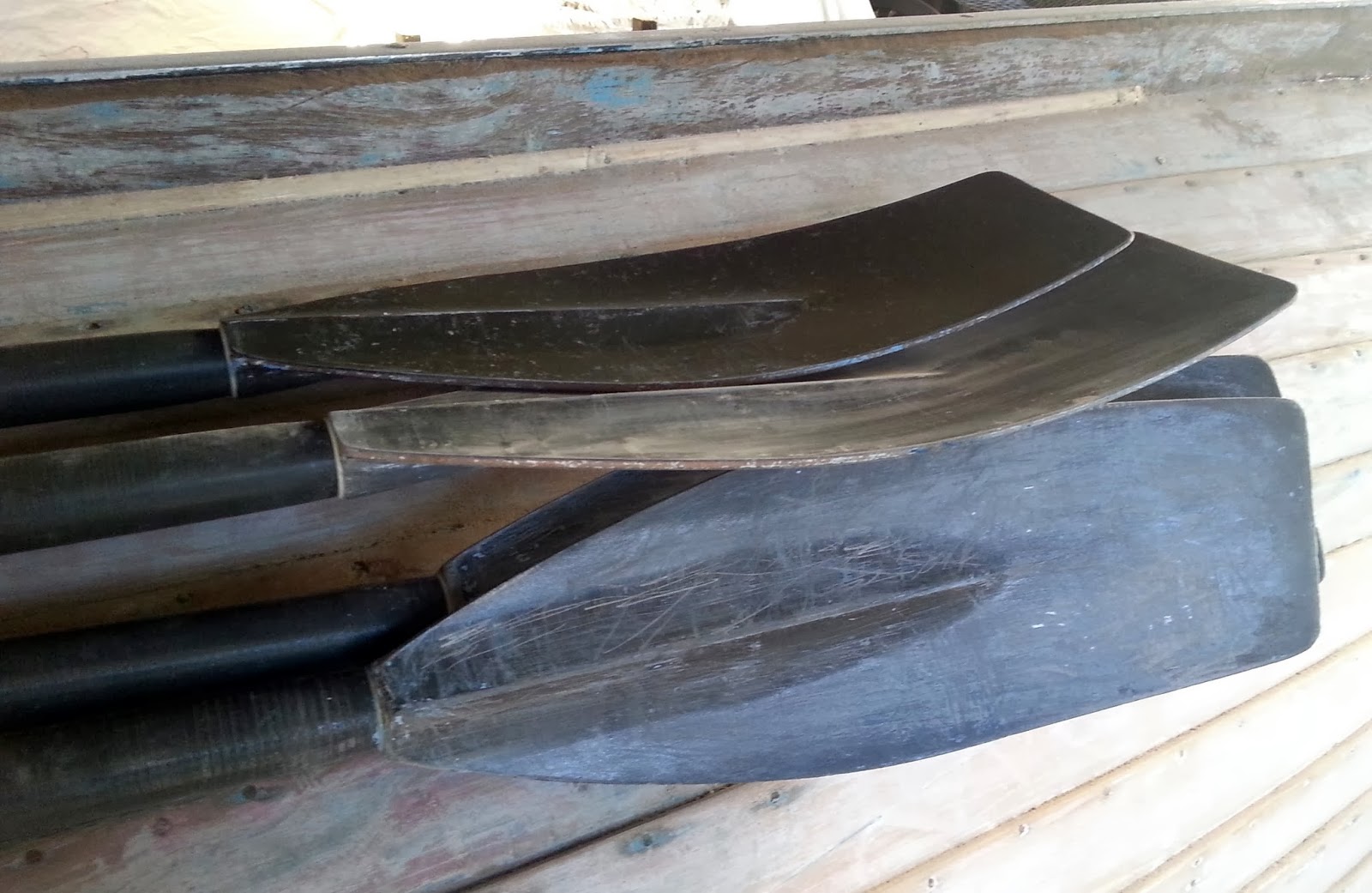 The car touch-up paint from Halfords worked a treat, though a can was only enough to do two colour coats on each blade, so by the time I had got through a can of adhesion promoter, one of primer/undercoat, two of blue and another of clear lacquer, I think I might have spent less on two-pack.

PS Today we went for lunch at Emsworth. The wind was in the south, and we made the mistake of taking the short northerly route so had to row through a rather stiff chop whipped up by the long fetch.
So we went to the Blue Bell and had beer and peanuts*, "The Lunch of Heros".

* Specifically, Irving's Frigate and Saharas Hot Nuts. Recognised by dieticians and food scientists as two of your five a day.
Posted by Chris Partridge at 20:55 1 comment: 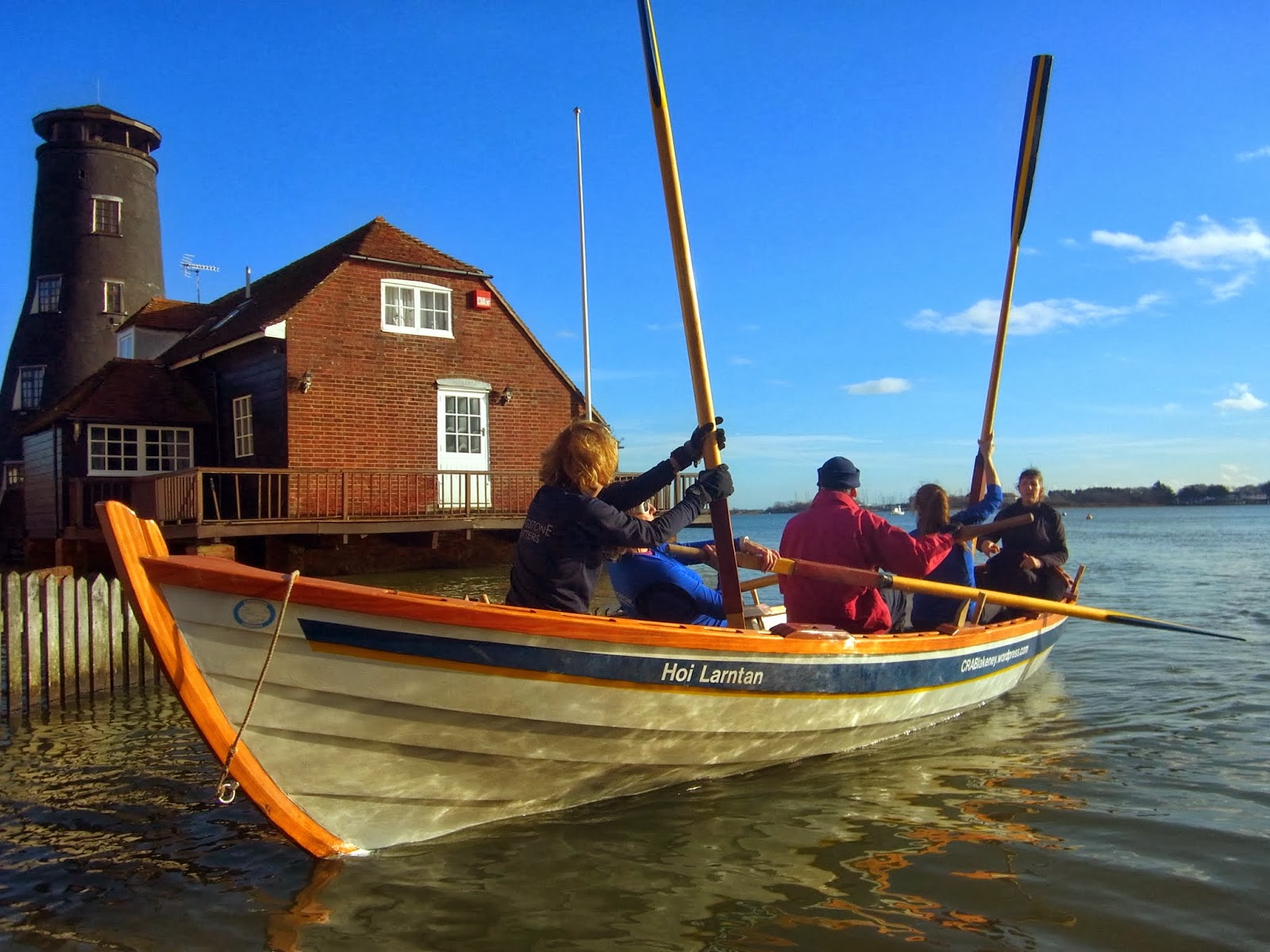 The St Ayles skiff I rowed at Beale Park last year, Hoi Larntan, came to Langstone in very un-January warmth. At Beale we had a scratch crew of sailors, but with an experienced crew from the Cutters and CRA Blakeney, she moves nicely along.
The oars, straight as per Scottish Coastal Rowing rules, were the first the club made, I think,  and are much too short. We put in a pair of the new, longer oars from Langstone Lady and took her out for a brief spin and she felt much more comfortable with the extra length inboard. It may even be possible to use even longer oars, say 13ft, though when you get to that sort of length the weight can be a bit of a problem for smaller rowers even if the balance is right. 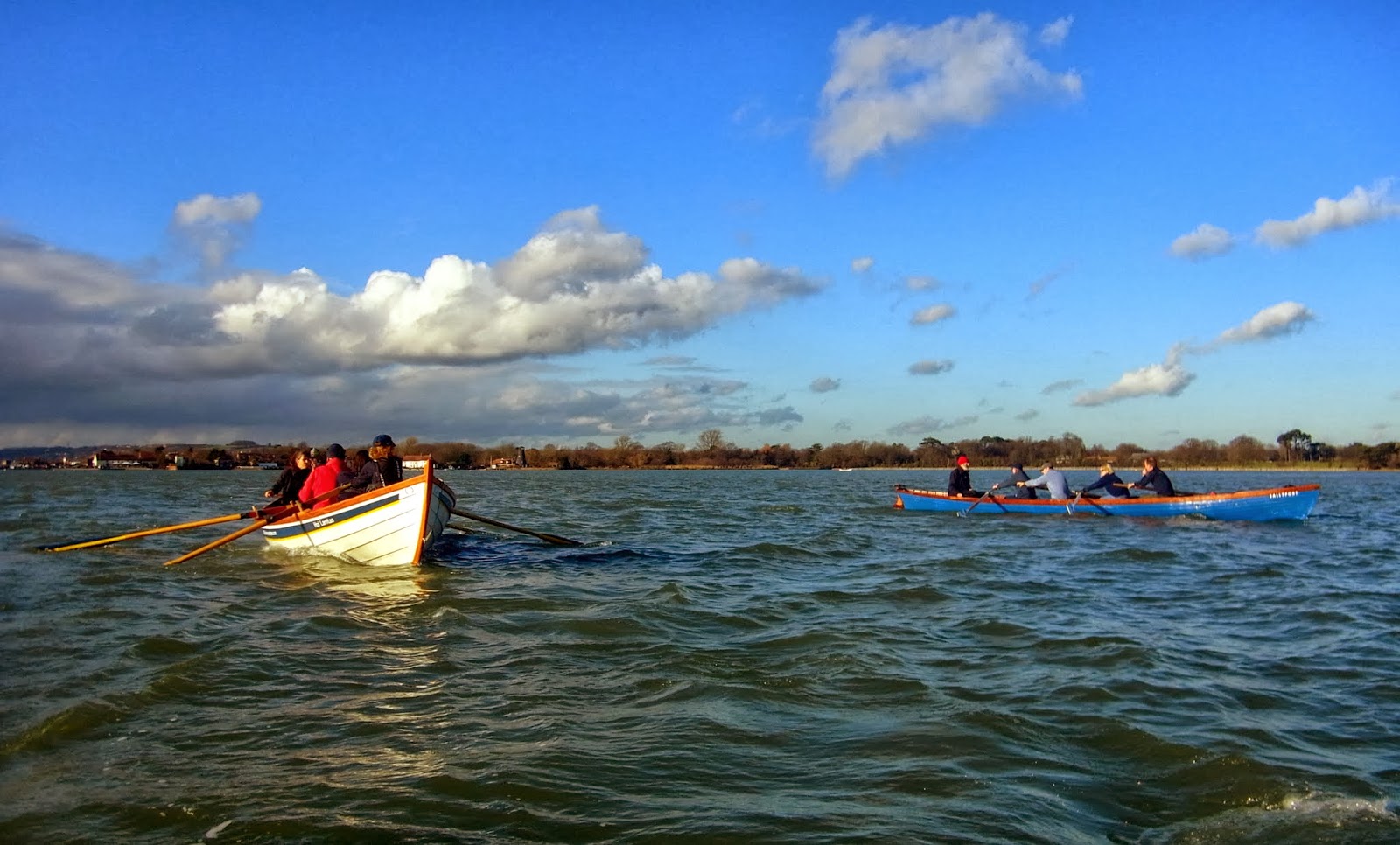 Here she is with Sallyport behind.
Posted by Chris Partridge at 19:02 No comments: 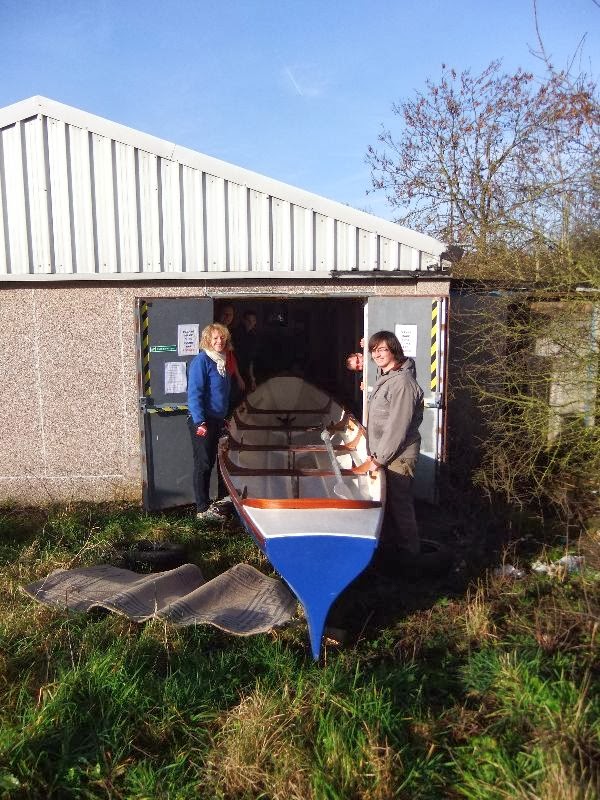 Keith Webster rang to tell me that the Seax Gig has emerged from its shed in Essex and should be on the water soon. She is looking good, and at 27ft 6in long should be fast too.
Posted by Chris Partridge at 19:43 3 comments: 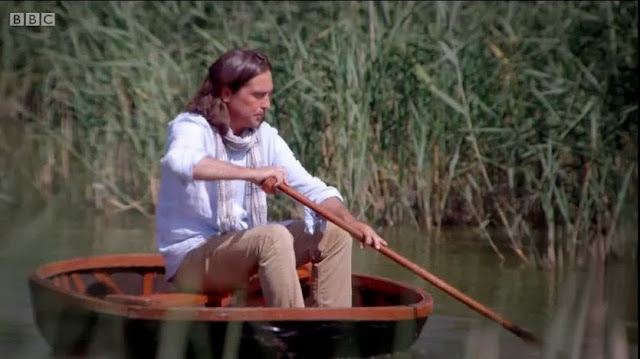 A while back I was a bit rude about historian Neil Oliver's rowing prowess, so it was a great pleasure to see that he hasn't given up on boats. In the opening sequence of part two of his new series, Sacred Wonders of Britain, has him emerging from the reeds in a coracle, rather tentatively and with iron concentration to be sure, but propelling himself.
I really want to try this sometime. How on earth do you stop going round in circles? 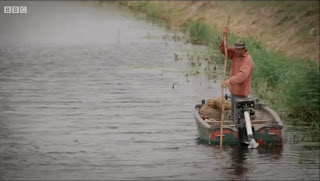 Later on, Peter Carter, the eel man, demonstrated punting round the fens. He baited one of his home-made wicker eel traps with an eel just going rotten, which apparently attracts them mightily. Apparently his old dad used to say that a dead cat was the best bait, but I think he was just saying that for the camera.
Also, episode two of Dan Snow's Operation Grand Canyon took our heroes to their destination. More of the same really, enlivened by an outbreak of trench foot. If you live outside the socialistic domination of the state-controlled BBC agitprop machine and cannot view iPlayer, you can download a very good ebook free from iTunes.
Posted by Chris Partridge at 20:12 2 comments: 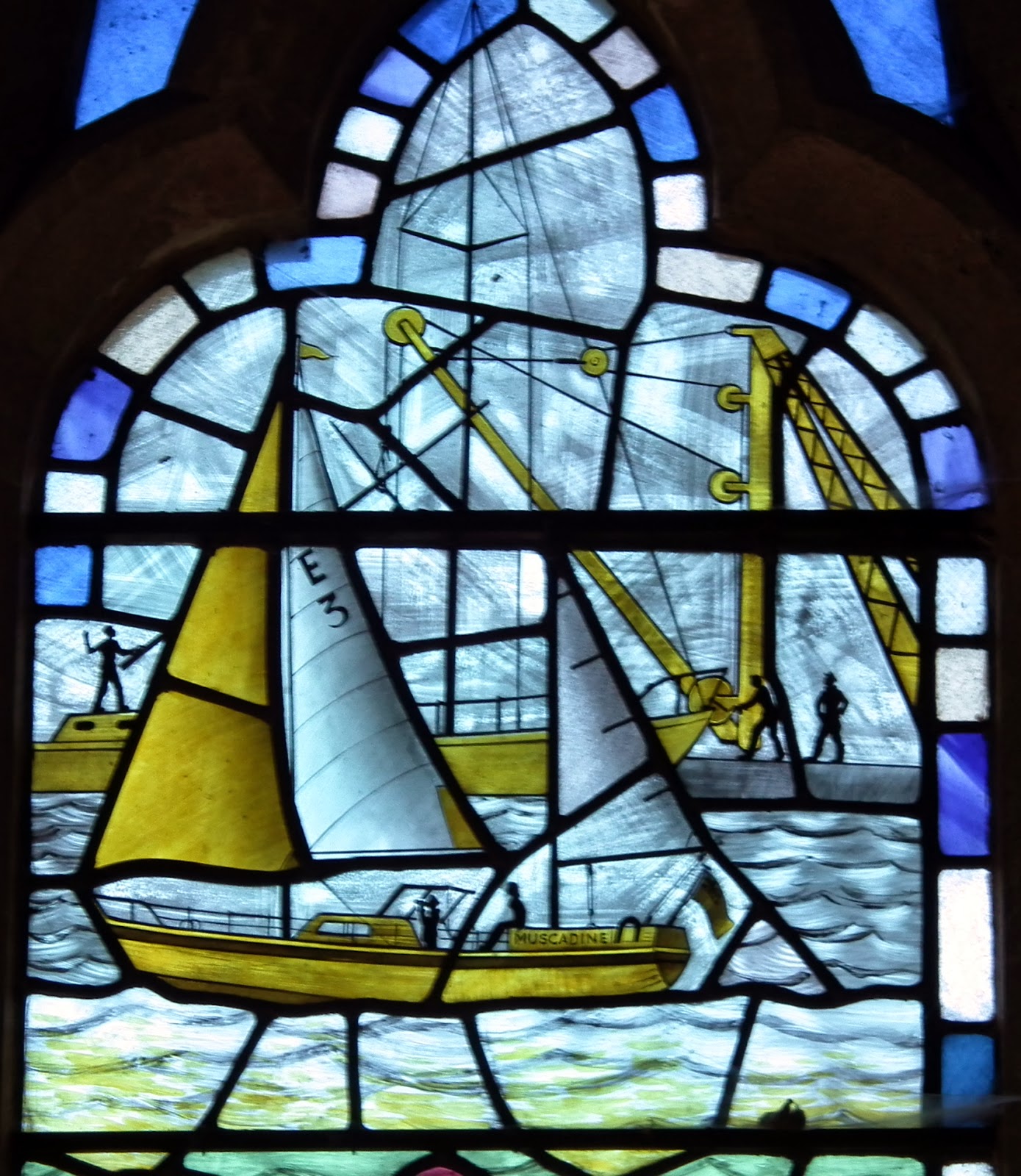 To Birdham to photograph the church for the Fishbourne parish magazine, prompted by Max of Bursledon Blog who noted the smart centre cockpit ketch in the modern east window. 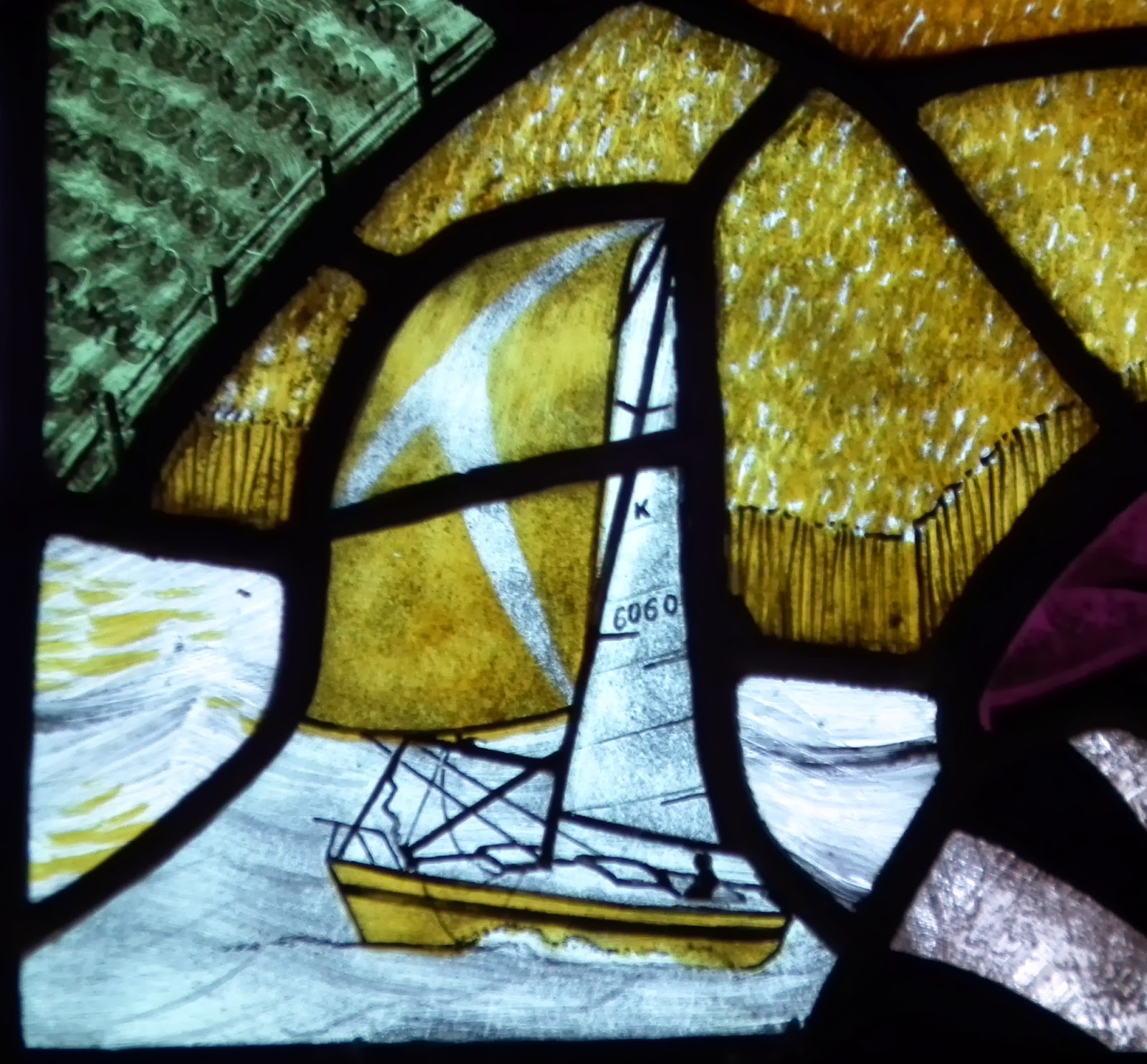 There she is: Muscadine, sail number E3. Anybody know what it is? And was she owned by David Graham-Wood, who gave the window to the church to celebrate his period as Master of the Worshipful Company of Glaziers?
There's another boat in the window, a sloop flying a spinnaker, sail number K 6060.
They sail the waters of Birdham Pool (that's the yard at the back) with the South Downs and Chichester Cathedral rising majestically behind. The tracery at the top is filled with local birds.
The main theme is Christ calling James and John. Christ stands between the brothers in a small fishing boat, with their father Zebedee at the tiller.
The window was designed by Michael Farrar-Bell and installed in 1978. 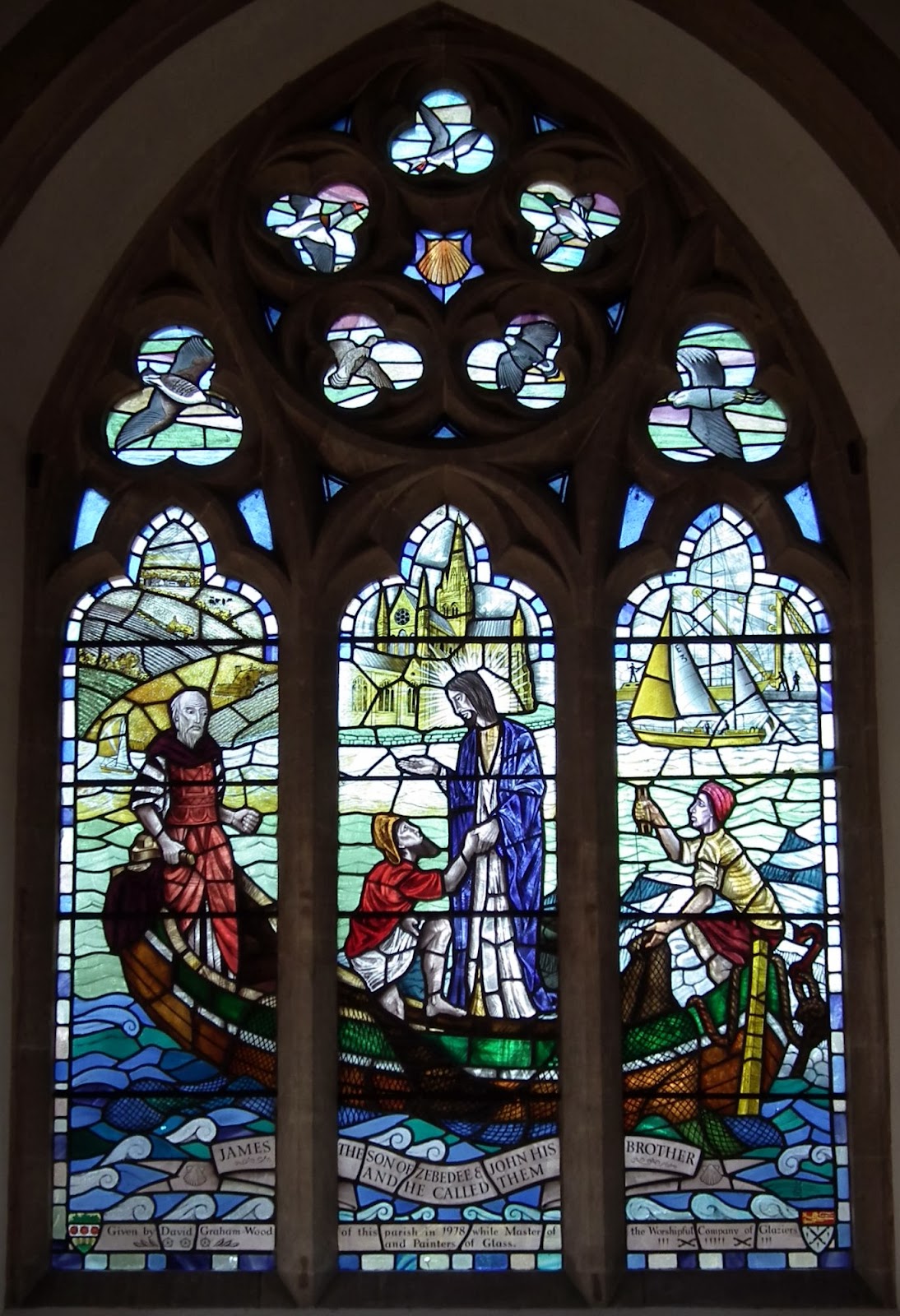 Posted by Chris Partridge at 20:15 No comments: 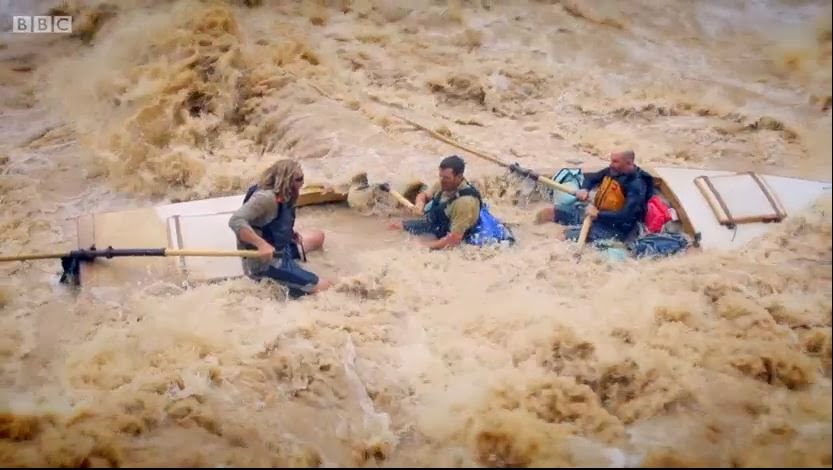 Historian Dan Snow is on the water again, this time recreating the exploration of the Colorado River as it rushes down the Grand Canyon, in Operation Grand Canyon on the Beeb.
The Grand Canyon is pretty much impossible to walk along, the only horizontal part being filled with the river. And the river is fairly challenging, with huge rapids and vast distances between any realistic pullout points. 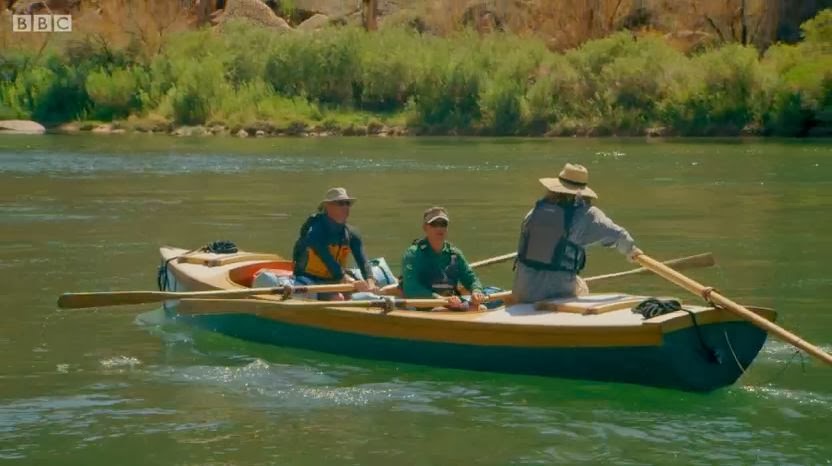 So it is not surprising that as late as 1869 the entire valley was a blank hole in the maps, entirely unexplored.
The first expedition was led by Major John Wesley Powell, a hero of the American civil war who had lost his right arm at Shiloh. They took three rowing boats of a more or less standard design, stuffed them with supplies and started out. It took them months, partly because they had no idea what to expect and had to recce every rapid before risking their delicate boats. Many times they emptied the boats and let them down on lines, following on foot. It must have been heart-wearying.
Snow and his merry men try and reproduce the conditions as far as practical, but they are led by experienced river guides (one with epic Victorian-style face fungus that would have been entirely at home on the original expedition) so progress is much quicker.
They are also followed by a fleet of safety boats and camera crews, but refreshingly Snow comes clean about this right at the beginning. Surprisingly, despite the concern for safety, they set off for the rapids without having practiced rowing at all - timing is rubbish. I would have thought that was a rather significant hazard. 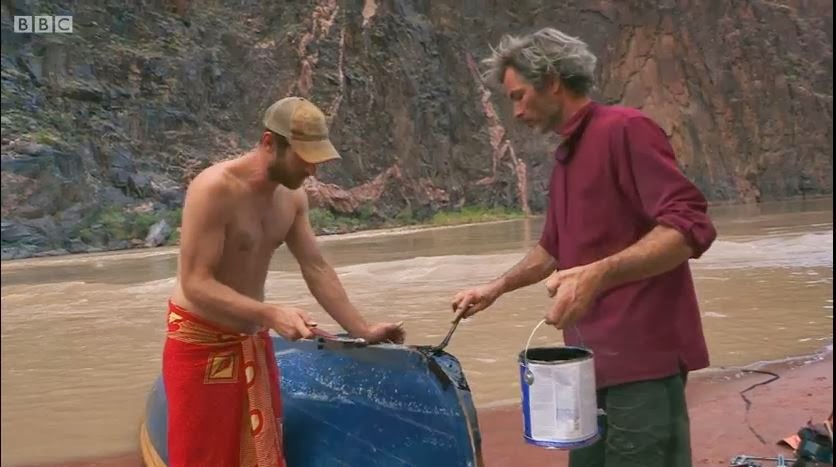 Inevitably, boats got damaged and there is an interesting scene where they repair a cracked stem using period tools and materials, ie Stockholm tar, a hand drill, a hammer and a bit of metal sheeting.
At least they had a tin of tar on board. Powell had to make his own. They had to climb to the top of the canyon to find suitable wood, burn it and extract the tar - an incredibly time-consuming process. What men!
The BBC has issued a free ebook to go with the series. Recommended. 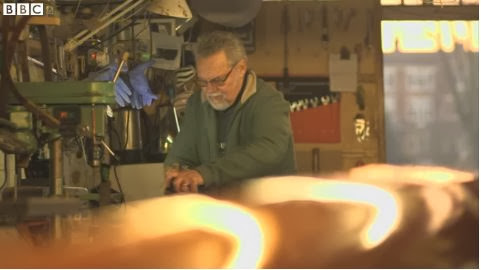 One of the nice things about the extended solstice holiday is that people have nothing better to do than send me links.
Julia Rooke sent a great link to a short BBC clip about Bill Colley, the last builder of wooden fine shells. He 'tortures' ply into shape to create boats that are both fast and beautiful - Julia recalls winning her first pot in a Colley coxed four. Unfortunately, they are not competitive against all the fancy plastic stuff and things of wonder though they are, they are not very practical for everyday cruising. So he sits outside his boatshed at Richmond, chatting to his mates, waiting for some fitness fanatic who values style above mere function to come by and order one. 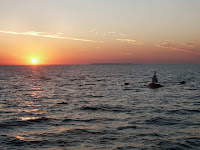 Gig rowers Loo and Roo Lynton-Evans have been to Clovelly and sent me a picture of the Clovelly Scull that hangs in the building at the top of the path down to the village. Still no word as to whether this clever offshore rowing boat might go into production. Let's hope that the improving economy might boost demand.
And Stuart Sutherland pointed out a link to the interesting Sinne 610 expedition rowing boat from Finland.

It has lots of decked area to store all the stuff you need for weeks touring Finland's amazing lakes. One bit of deck comes off to form a table - very ingenious. It even has a pair of wheels that instantly mount onto stub axles for easy portages.

Posted by Chris Partridge at 16:32 No comments: