Sculling in Brittany Back in the Day 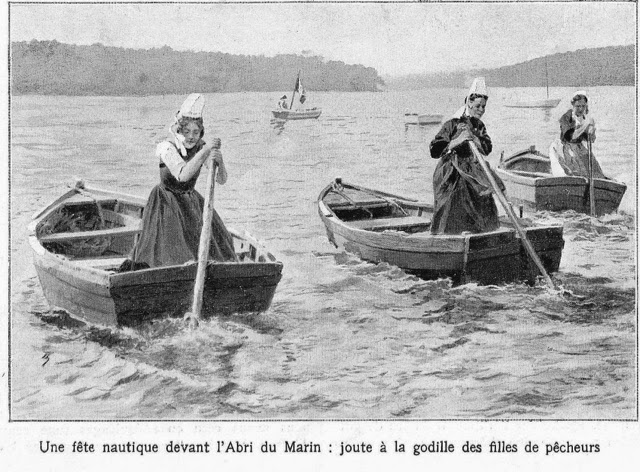 I love the hats in this picture of Breton fishermen's wives in a sculling race. No date, but evidently in the good old days or possibly way back when.
Fearlessly pinched from Roger Barnes's Facebook feed.
Posted by Chris Partridge at 11:04 2 comments:

I have been photographing Sussex churches for years for Fishbourne Parish Magazine and the Looking at Sussex Churches blog, and if I spot a boat I snap it. Here is a slide show of all the ones I can remember.
Posted by Chris Partridge at 17:34 2 comments: 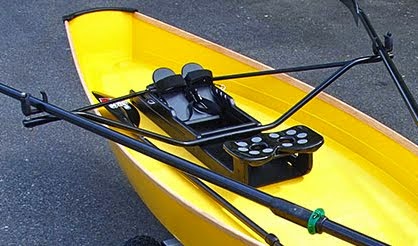 Readers with long memories may recall that I am restoring my grandmother's fishing boat with a view to propelling it along England's canals and rivers with a stand-up paddle.
Little Snarley is a Hampshire punt measuring 11ft 6in by 3ft 6in beam, so she is a good bit shorter and a tad wider than the SUD, but I think that the dimensions are about right. Unfortunately she is MUCH heavier - the SUD is 90lb at around 140lb for Snarley if my bathroom scales are to be believed (and you should see the lies it tells about my weight). Of course, Snarley is a symphony of old-growth mahogany and the SUD is foam-filled composite fibreglass so yer takes yer choice.

An interesting new take on the Cornish pilot gig is under construction the the Lake District by Fyne Boat Kits.
The boat was commissioned by the Whitby Friendship Amateur Rowing Club, which explains the confusing name - Cornish Whitby Gig.
The new boat was designed by John Harris and Jay Hockenberry of Fyne's American associates Chesapeake Light Craft, using their LapStitch system to lock the planks together for a light, strong construction.
The shape is exactly the same as a Cornish pilot gig and she uses thole pins, but the seating is novel. Each rower sits on a fore-and-aft plank with the feet in fixed stretchers so they adjust their bums rather than their feet. John Harris has used this principle before in his Team Dory but I have never got a chance to try it. It looks as if it might give a better swing on the oar - I wonder how it works in practice?
It is a bit obscure why Friendship want such a boat. They have their own lovely, traditionally built four-oared gigs which are very fast as demonstrated in the Great River Race every year. They won't be able to enter official Cornish gig regattas in it as it doesn't comply with CGRA rules. And I doubt if it will be much cheaper than a grp gig.
It will sure look nice, though. 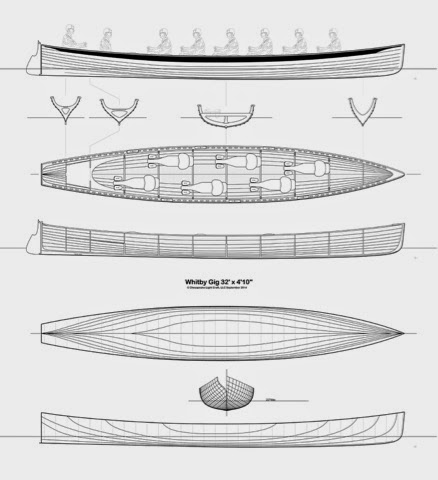