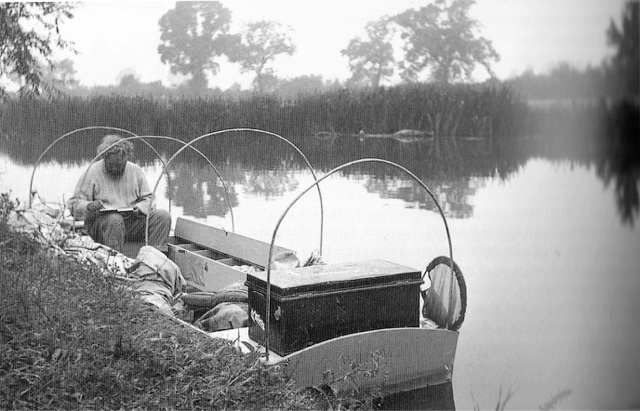 In 1939 the wood engraver, printer and naturalist Robert Gibbings found himself locked out of the second world war on the very understandable grounds that he had taken a bullet in the neck at Gallipoli in the first one. Chafing in his job teaching book design at Reading University, he did a very extraordinary thing. He designed and built a boat capable of carrying his artists tools, his scientific instruments and his camping gear and set out to explore the River Thames. 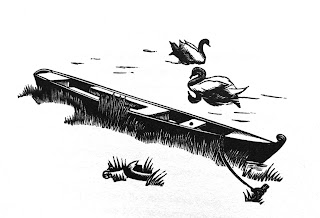 He rowed in a leisurely way downriver from the source near Cricklade to the botanical gardens at Kew (by then further progress was impossible because of the war). On the way he observed the birds, the plants and fish, using a glass-bottomed bucket. He put water samples under his microscope. And he talked to anyone who passed (especially the girls - he was keen on girls). And, of course, he drew the scenes, including this charming cut of the boat itself and the one below of Shillingford Bridge with a sculler just visible under the main arch.

Then he produced a book of bucolic charm, Sweet Thames Run Softly, which was a surprise success in a Britain locked in a desperate fight for survival. Escapism, perhaps.
In the preface, Gibbings explains the boat creation process: "I wanted a boat in which there was plenty of room to sleep, and one which would not turn over when I turned over. She would have to be flat-bottomed in order to negotiate the shallower reaches of the river, and I hoped that she might be propelled by sculls, for I was brought up by the sea and have an instinctive scorn of 'prodding the mud'. But wherever I inquired I was given one of two answers: either that such boats were not in demand and therefore not made, or that they were in such demand they were impossible to procure." 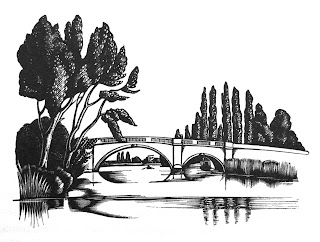 So he designed it himself with advice from a local boatbuilder, and had it built in the woodwork department of Reading University, Gibbings and his son providing 'unskilled assistance'. It took a couple of weeks to build. Finished in eau-de-nil green, he called her Willow.
Gibbings is one of my favourite book artists, but I had never read Sweet Thames Run Softly until I noticed a new reproduction published by Toller Books at the bargain price of a tenner. The photo is from a website devoted to his life and work.
Posted by Chris Partridge at 09:20 No comments: 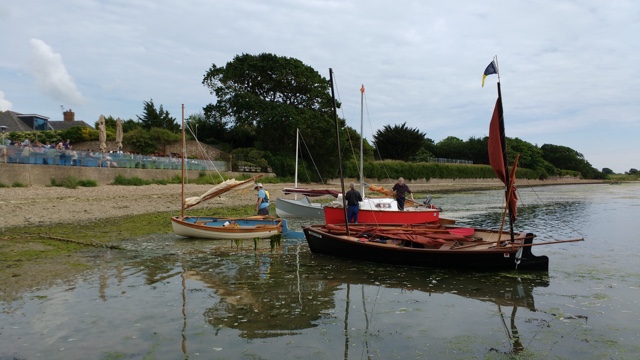 Went sailing again on Saturday, with fellow Dinghy Cruising Association and Home Built Boat Rally members Graham Neal, Paul Hadley and Chris Waite.
We breezed up with the tide to the Crown and Anchor at Dell Quay, where we sat on the terrace keeping an eye on our boats as we drank beer.
Every time we meet it feels more Last of the Summer Wine than ever.
Life is good.
Posted by Chris Partridge at 19:25 2 comments: 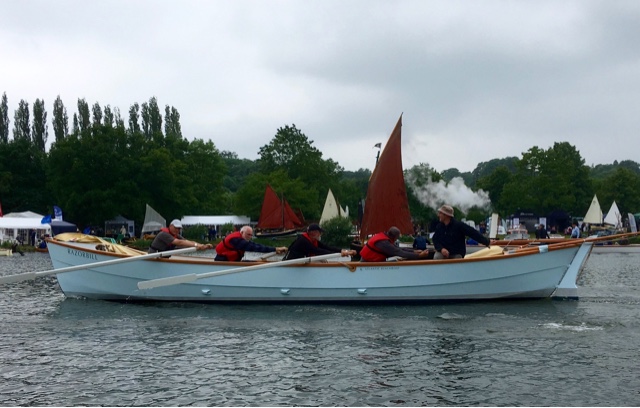 Went to Beale Park Boat Show on Saturday and got to row David Evans's Atlantic Beachboat, a sail and oar craft I have mentioned before.
To get a crew together, I commandeered rowers from the Bristol-based St Ayles Skiff Hannah More. 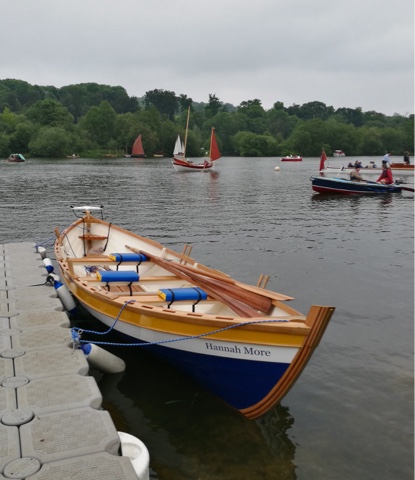 We all agreed the Atlantic Beachboat rows satisfactorily fast, even with the straight sea oars David made. It is my belief that with a good set of carbon fibre Macons she would go like a train.
I really liked the way David had provided slots for the oars to stow in, neatly against the side of the hull, and special slots for the rowlocks beneath the gunwales so they can't drop in the oggin when under sail.
Posted by Chris Partridge at 10:39 No comments: