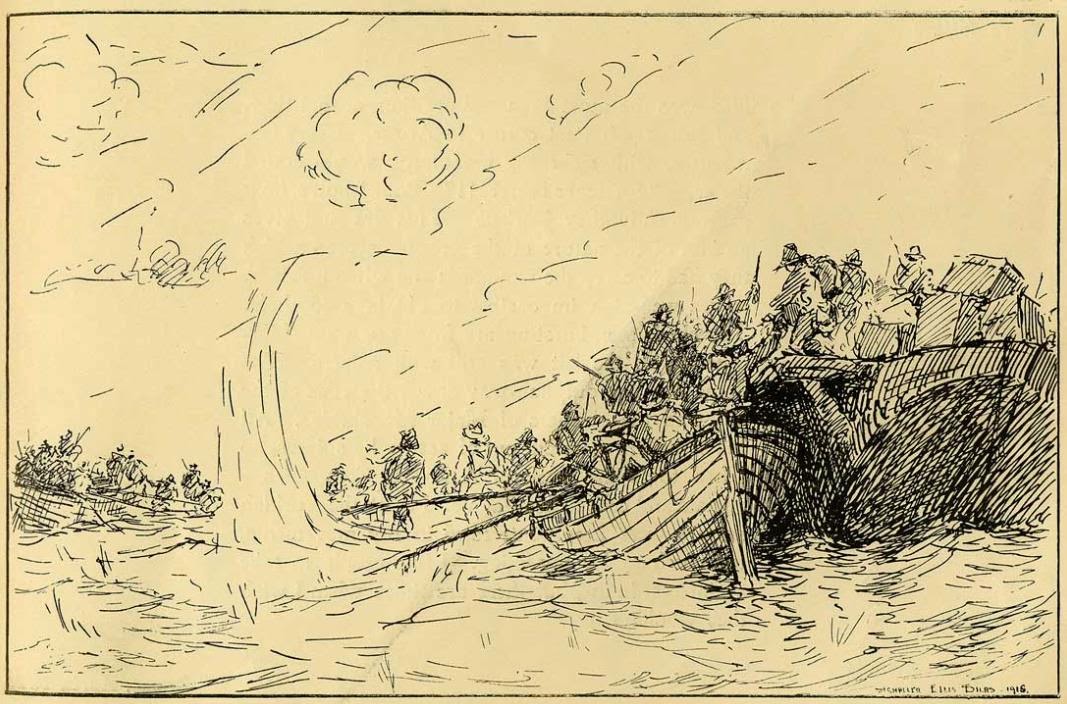 My grandfather was rowed ashore in a boat like this. He fought up the cliffs of Gallipoli, coming to a stop in a trench opposite the Turkish lines. Half his comrades and all the officers were killed, leaving him, a warrant officer, in command.
When the Turks attacked he led the seven Australians and nine New Zealanders that remained alive out of the trench is a desperate, successful charge.
A boat like this took his wounded body to the hospital ship where he died. He never knew that he had a second son, my father, born just a few days before. 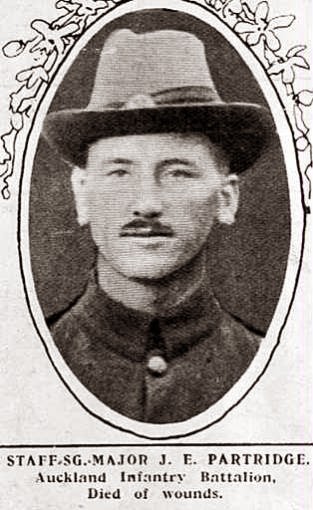 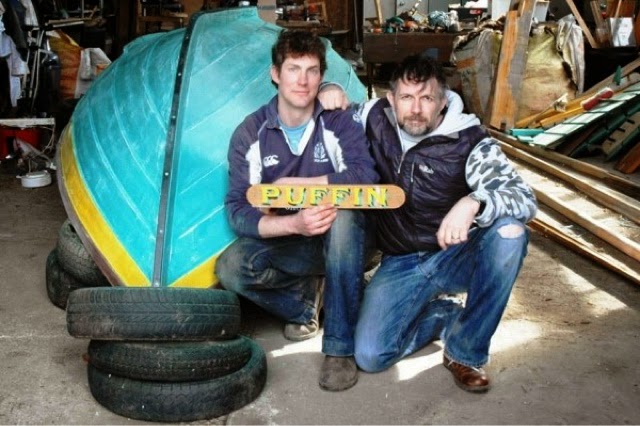 Ian Baird and Frazer Macdonald Hay row St Ayles Skiffs at North Berwick, down on the bottom right hand corner of Scotland. So, of course, they want to row round the entire country. As you do.
They have acquired and repainted Puffin, a skiff that was built for St Abbs but is currently unused. The original yellow and turquoise has been replaced with navy and white, and the original fancy bow adn stern carvings have been carefully removed for the inevitable GoPro cameras.
Next problem: getting a crew together.
They have solved this rather ingeniously by planning a row from club to club, offering rowers the chance to join in for just a short leg or for longer, more challenging distances such as Cape Wrath.
The route takes them through the Forth and Clyde canal to Glasgow, up the coast inside the Western Isles and back down the east coast. Demand has been brisk, apparently, and the expedition is being filmed by the BBC for a doco.
There is a highly entertaining and well written blog here: skiffaroundscotland.co.uk; and you can follow them on Facebook here: www.facebook.com/skiffaroundscotland.
Good luck, guys!
Posted by Chris Partridge at 09:07 1 comment: 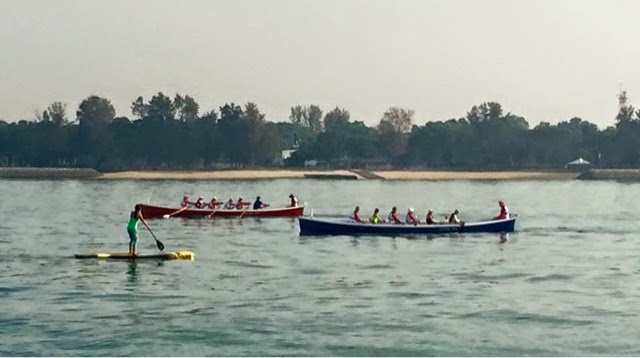 Two plastic gigs have rowed round Singapore Island, which must be the most exotic location for a new gig club so far (go on, people - prove me wrong).
The 140km, 24 hour row was in aid of the Mission to Seafarers (as a lad our local church supported them under their unreconstructed name Mission to Seamen). The boats were built by Fusion GRP of Saltash, and will remain in Singapore to seed interest in rowing, a very laudable aim.
More about the Mission Row Around Singapore Island here: www.missionrasi.com.
More about Fusion GRP here: www.facebook.com/FusionCornishPilotGigs. Posted by Chris Partridge at 09:07 No comments:

Rowing in the Basque Country 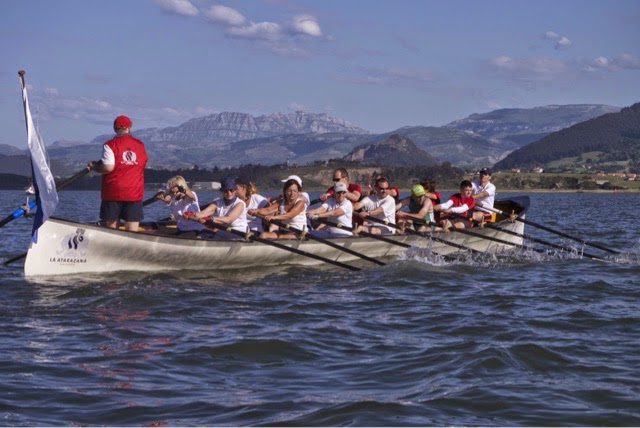 For journalistic reasons I get press releases about property round the world which I usually glance at and delete in one fluid operation, but today I got one about the northern Spanish region of Cantabria, and the words "fierce local rowing competitions" just leapt off the page.
A quick Google and I discovered a rather wonderful boat called the trainera (pronounced try-nera), the traditional rowing boat of the Basque country.
The trainera gets its name from closely-woven nets called traina, used to catch anchovies and sardines. the working traineras of yesteryear were broader for greater carrying capacity and could also be sailed, but they were raced from at least 1859 when the first recorded regatta was held at Santander.
The introduction of the infernal combustion engine made traineras obsolete for fishing but racing continued, the boats evolving into a much slenderer shape for speed. New ones are high tech indeed, using carbon fibre and kevlar, but they still use a traditional single thole pin with the oar attached by a loop of rope called an estribo (known in Catalonia as an estrop and in Scotland as a humliband. I love these words).
The hulls are 12m long and carry a crew of 12 rowers in pairs plus a bowman (callled a proel) and cox (called the patron).
The stern is an interesting canoe shape. Apparently, turning the boat any sort of a sea is a very tricky operation, which I imagine may be because the stern would slice through an incoming wave and risk swamping the boat whereas the little transom on a Cornish pilot gig would lift the stern out of the water. Mind you, turning a gig away from the wind is not a risk-free operation either. 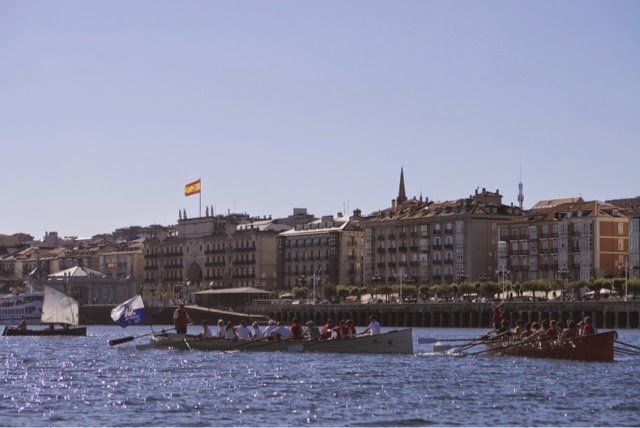 Another joy was discovering Pamela Cahill's lovely blog, from which I ruthlessly stole these pictures. An Irishwoman living in Santander, Pamela's club sounds like fun. She writes: "When it’s warm outside we go over to the Puntal sandbank and park up to have a swim. When it’s cold – it’s a hot coffee before we go – a fast row with our fleeces on – and a coffee again to warm up on dry land. The destination is determined by the wind and the weather rather than anything else. Some days we are adventurous and pack a picnic and head off for a few miles up river to the Rio Cubas. (When I say picnic, you should read banquet fit for a king.)"
Sounds just like Langstone Cutters. Who, incidentally, are rowing out for a Full English at the Marina Bar tomorrow first thing.
Pamela's blog is at http://pamelacahill.com/2014/06/21/trainera-rowing-santander-bay/. Scroll down for lots more pictures of traineras, and other local boats.
Posted by Chris Partridge at 17:22 6 comments: 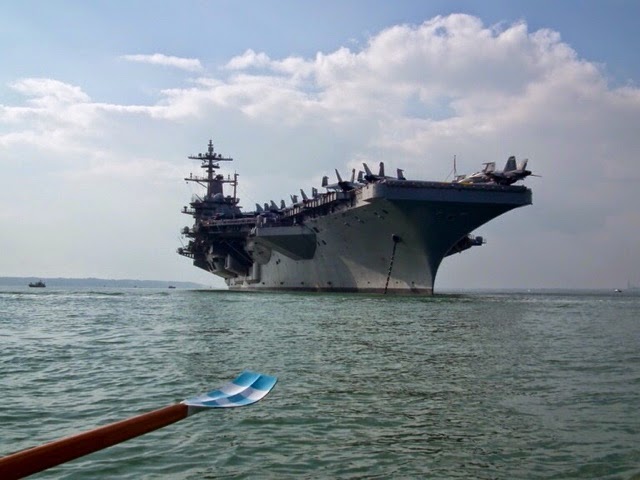 The monster aircraft carrier USS Theodore Roosevelt is visiting Portsmouth, so Langstone Cutters decided to row round it. 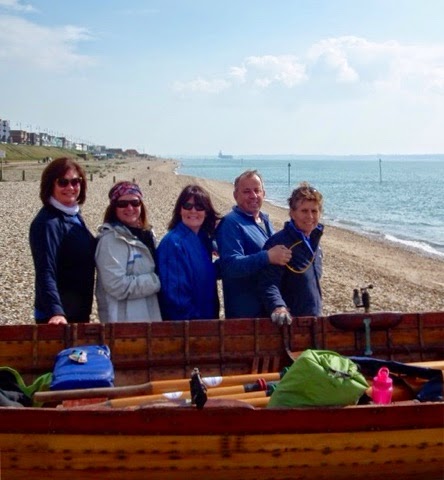 We launched at Lee-on-the-Solent, from which the ship was clearly visible, pulled south, dodged an LPG tanker in the shipping lane and got shoed away by the military police (commonly known as the modplod) in their rib. They looked bored out of their skulls. Then we went home. The weather was only a tad away from being idyllic.
Posted by Chris Partridge at 15:52 No comments: