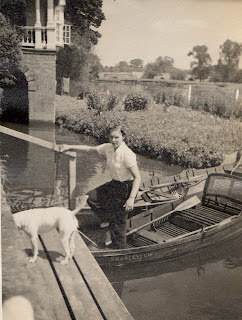 My mother Pat Partridge died a couple of weeks back, which is why I was looking through the family photo albums. Cousin John sent me this picture of her getting out of Snarleyyow I, the Norfolk punt used for fishing the Thames at Wallingford. This must have been taken just after the War. I remember it well, though in the 1960s it was replaced by a nearly identical one, called Snarleyow Too.
Behind is the double skiff, Snarleyow III (I think - the numbering got a bit confusing and the name lost a Y as well). And to complete the fleet, here is my uncle Tim in 1949 at the wheel of the magnificent new Andrews slipper launch called...er...Snarleyow. 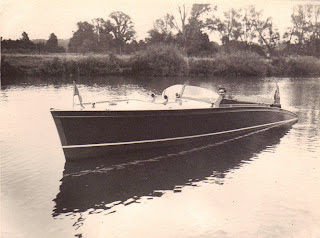 The reason my grandparents chose the name is lost in the mists of time. Snarleyyow, or The Dog Fiend is an entertaining book of the sea by Captain Marryat. Snarleyow was a heroic artillery horse in Kipling's poem of the same name. Neither seem obviously appropriate for boats, but it is a strong and unusual word so I have named my small skiff Snarleyow in tribute.
Posted by Chris Partridge at 16:59

So sorry to hear about your mum the other day Chris. I'm sure you have the sympathy of everyone who has lost a parent.

PS That photo of the slipper launch is a beaut!