This exquisite Thames racing skiff was built by Michael Dennett at Laleham. Apparently he has a tree of mahogany that he has been using for these boats, which are built in matched pairs for operations like Dittons Skiff and Punting Club.
Several of these skiffs were at the Great River Race. I was impressed by the complex series of actions needed to bring the blades in. In action, they are held down by a twisted cord halfway up the rowlock, so to get them out the entire loom and handle must be slid out and the blade raised over the cord. The rowers could do it in a swift, neat and practiced movement but it must be much easier with a swivel, when you can just turn the blades parallel to the boat and slide the handles forward. Each to his own, I suppose. 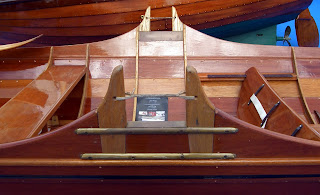 Posted by Chris Partridge at 22:37

The strings are really only there for racing (preventing a blade jumping out) but usually get left on all the time. The clever thing about skiffs is the combination of the pins, the brass slide and the specially shaped leather button on the loom. These features make the blades almost self feathering on the return stroke and self setting when the power comes on. You can row with a very loose grip (basically no grip at all) and most of the bladework is taken care of for you. Very cunning but it takes some getting used to.