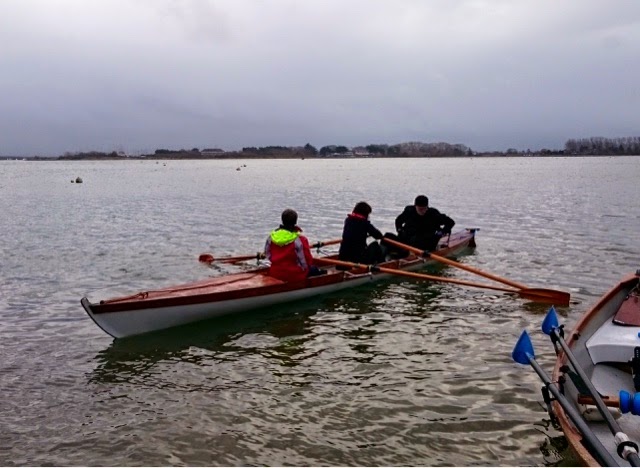 Today saw the launch after restoration of Victoria Holliday's double scull HRB, named for her grandfather Henry R Beeton, a rather good artist - a sale of his work funded the boat.
Originally called Vernon Ball, she was built as a training tub by the Eton College Boatbuilder, but it is not known whether it was built for the school or some other club.
The hull is GRP with mahogany sheer boards and plywood decks for and aft. The slides and stretchers are supported on a rather ingenious structure of struts, and the cox's seat is quite grand - clearly a place intended for someone of the stature and gravitas of an Eton College master. I felt unfit to occupy it. But it was jolly comfortable even without cushions. 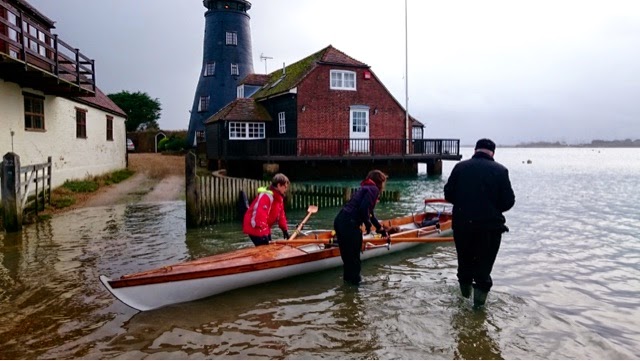 Being a training boat she is much broader and heavier than a fine scull, but this just makes her all the more suitable for the waters of Chichester and Langstone harbours which can be considerably more challenging than the Thames at Windsor.
As it proved today, when the wind gusted to nearly 25 knots at one point bringing waves that nearly reached the gunwale even in the sheltered waters opposite the Mill. Never rocked the boat, though.

Thanks to Mike Gilbert for the photos.
Posted by Chris Partridge at 17:50