Dutch Lifeboats at the GRR 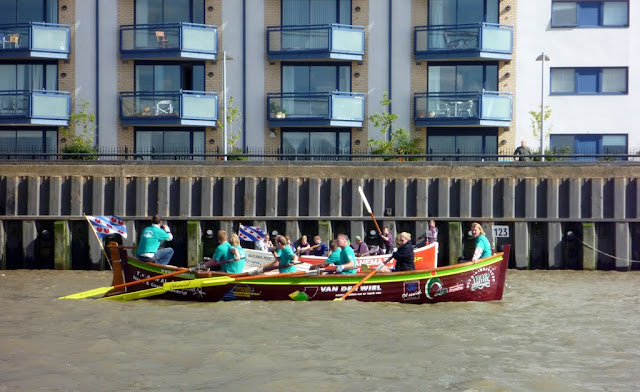 The Dutch seem to be obsessed with rowing old lifeboats and naval training boats, which has had the great outcome of preserving a large number of historic boats including many built in Britain. No fewer than eight were competing very aggressively at the Great River Race - the Services trophy was won by the Royal Netherlands Naval College in the lifeboat Pollux, in a time of 2hr 49min.
The sloeproeiens or 'rowing sloops' above are the eight-oared lifeboats Oksewiel (front) and Zeeotter, rowed by crews from Den Bealch. Oksewiel started at 123 and finished at 117 in a time of 3hr 9min. Zeeotter moved up from 130 to 109 in a time of 3hr 3min.
Here is a good video of Oksewiel racing another sloeproeien.

Posted by Chris Partridge at 22:04

My fav so far, Chris! I want one!
I figure I could pull at that pace and thrust for about a half hour, then done for good.