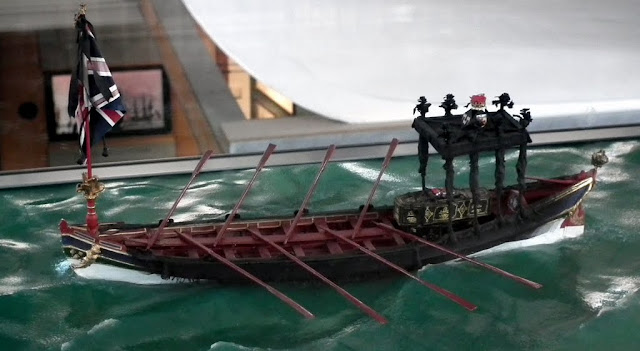 I sent David Nabors of Mermaid Central, NeverSeaLand, a picture of the delightful mermaid carved on the bow of King Charles II's barge, which was also used to carry Nelson's coffin from Greenwich to London in one of the most spectacular funerals England has ever seen. 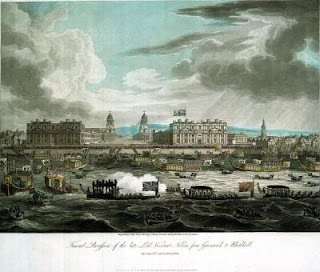 David responds with a link to a Hornblower story that had passed me by, avid C. S. Forrester fan that I am. Newly promoted Captain, Horatio Hornblower finds himself lumbered with the task of organising the water-borne funeral cortege. Aboard the old barge, he first discovers that consulting his watch means that he cannot maintain a suitably funereal aspect, so he hangs it on a coffin handle for ease of consultation.
What with a leak that means his crew have to 'bail like hell' (his orders) and all the other things that go wrong on occasions like this, he nearly loses the corpse of Britain's greatest hero and his watch. It is hilarious, and confirms my suspicion that Forrester is one of our greatest novellists, not just a naval history buff.
Thanks, David. I am now going to read Hornblower and the Atropos with delight.
Posted by Chris Partridge at 23:35

thanks for this! We were over the pond last spring and spent a couple of days in HM's dockyard. Loved the barge and it dawned on me when reading about it that it was not in there because of Charles but because of Nelson! The Man is Holy over there. re your tag of rowing for pleasure we promote rowing for transformation of kids lives here..http://kidsnclassicsboatshops.blogspot.ca/ Malcolm Black, Glen Williams, On Canada