Pics from the Great River Row 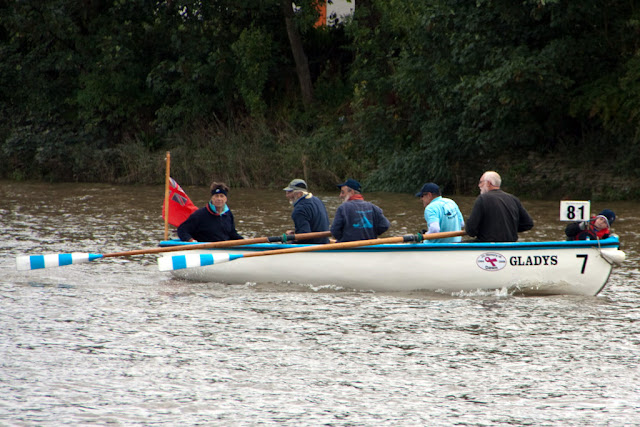 Steve Sagrott has sent over a bunch of pics that he took from the luxury of one of the river boats following the race.
Top is Gladys, our Felixtowe Clayton skiff. The Claytons were moulded from workboats used in Thames estuary ports and come in two varieties, the Felixtowe and the Gravesend. The Felixtowe is said to be faster than the Gravesend, though 'faster' is perhaps not the right word. 'Less back-breakingly slow' would be more accurate.
Gladys is pictured with Geoff Shilling Nick Parish coxing, Nick Parish Geoff Shilling at stroke, then Nigel Armstrong, Mike Gilbert and me in the bow. Our passenger, Dougal, took some video that I am in the process of editing. 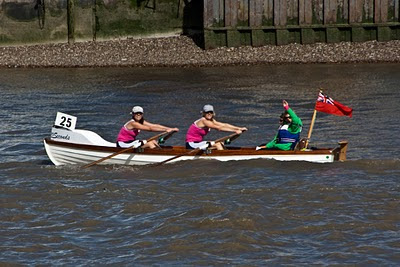 Here is 15 Seconds, a Salter skiff, rowed by Deborah Pentesco-Gilbert and Sandra Russell, coxed/passengers being their sons Ben and Tim. They won fastest women and fastest veteran women. And because they started right at the front of the pack (number 25) we couldn't quite catch them. 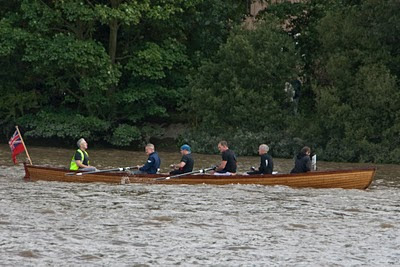 Everyone's favourite boat is Bembridge, an all wood Solent galley that is fast and a joy to row but has little chance of winning anything because of its crippling handicap. Nevertheless, they managed to overtake more than 200 boats. Didn't catch us, though.

This is Mabel, our Gravesend Clayton, which managed a respectable time but not as fast as Gladys.

Finally, here is Millie, a Teifi skiff, which finished the course in 3hr 32min. Good, but not as fast as Gladys.
Posted by Chris Partridge at 22:30

Chris, Spotted a minor error in your text.... "Gladys is pictured with Geoff Shilling coxing, Nick Parish at stroke," the old farts should be the other way round... Nick is Cox and Geoff at Stroke.

So they are. It was about that time Mike yelled 'come on, you've all gone to sleep! Timing! PULL! etc, so obviously I wasn't paying attention to what was going on in the back of the boat.

The subtle powder horn in the Solent makes her look like a boat I wouldn't want hunting me down in my wake. What a cool boat. How many boats total?