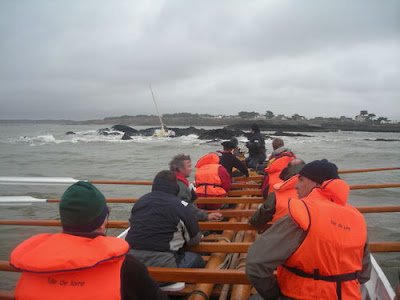 A nice story linked to at In the Boat Shed describes in pictures the rescue of a yacht in Britanny a couple of years back by a rowing gig. The Mor Bihan, based in Vannes I believe, is a 10-oared Bantry Bay Gig, designed by Canadian naval architect Steve Killing, with a sail plan by Francois Vivier, for the Atlantic Challenge in the US and now very popular in the US, Ireland and France. It was copied from a captain's gig that took some of the crew off the warship La Resolue when she was wrecked in Bantry Bay in 1796.
By a bizarre coincidence, the boat on the rocks was also designed by Vivier - it is a Stir Ven pocket cruiser. But perhaps it is not so strange a connection - Vivier is a very fine designer and a lot of his boats are sailed and rowed around the coast of France and over here.
Posted by Chris Partridge at 22:23