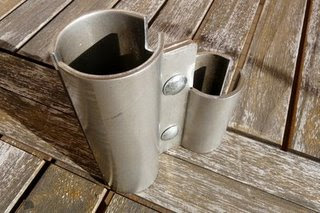 Guy Capra has received the first prototype of his new invention, the ScullMatix automatic sculling oar, and lost no time putting it on test.
The device is being manufactured by Chuck Leinweber at Duckworks. It is a sort of crank that bolts an extra offset handle to a regular oar, converting it into a species of yuloh. According to Guy, it is much easier to use than an oar and much handier than a yuloh, which tends to be extremely long.
Here's a video from Guy's blog Nauticaerium.

Actually it does put a bit of speed on. I got a unit later and it is quite effective.
Chris