The gunning dories of Marblehead were designed to get duck hunters and their gear out to the offshore islands, where they would set their decoys and wait. The poet Ogden Nash had no time for the pursuit: 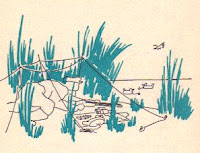 The hunter crouches in his blind
'Neath camouflage of every kind,
And conjures up a quacking noise
To lend allure to his decoys.
This grown-up man, with pluck and luck,
Is hoping to outwit a duck.

He just didn't get it. But James Rockefeller does. He lyrically describes the joy of hunting from the ledges of the Maine Islands in a wonderful article he wrote for Island Journal in 2007, entitled Old Ducker (available in pdf form here), after the lobster boat he used to go out to the islands, carrying his gunning dory on the stern:

"Someone asked me once what made one get up before the dawn, with ice on the puddles outside and a keening wind, just to encase oneself in clothes of many layers, haul all that sundry gear aboard the “Old Ducker” in the dark before dawn, steam out to the offshore ledges for two hours, set out tollers in that frigid water, row one’s ass off for four or five hours chasing crippled birds, slip on slippery rocks and weed, risk one’s neck on a tidal ledge, and then repeat the process in reverse, all for a few fishy-tasting ducks.
“It extends the yachting season,” I would say facetiously, to shunt away the conversation, for there are few souls with whom you feel comfortable sharing your personal religion. To me those days from dark to dark with the quiet harbor before the dawn, the sea and the wind and the frozen weed on the barnacled rocks, the unspeakable beauty of the eider duck, and the boat, were the essence of living on coastal Maine. The Old Ducker, linking them all together, was a church of my own choosing. The physical exertion, the sights and sounds and smells, the moments of terror, the reverence to the god of weather, the multifaceted path from safe harbor out and home again, were a spiritual experience akin to the aborigine walking his Dream Line in the Outback, or the Bushman trekking his beloved Kalahari." 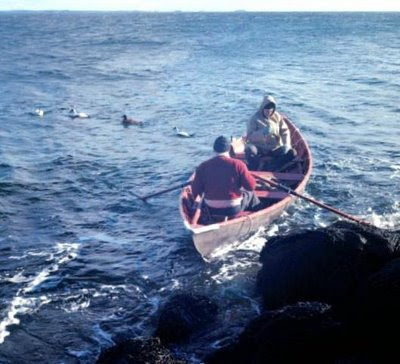 The dory in question, shown with Rockefeller at the oars, has become a classic. It was designed for him back in the 1960s by John Gardner, based on lines he took from a derelict example made by William Chamberlain in the early years of the 20th century. It appears in Building Small Classic Craft.
The hull is double-ended, unlike most dories which have a 'tombstone' transom, and has a strong sheer so the ends throw off waves but the middle is the correct height for the rowlocks.
Gardner fiddled with the lines to improve the sailing characteristics, and added a centreboard and rudder.
One of the problems with double-enders is that the rudder is a mile away from the helmsman, and it is crucial to keep to the middle of the boat for balance. With the original downwind rig, the hunter steered with one of the oars, which has the advantages of simplicity and robustness but must be tiring over a long distance. Gardner's solution is to mount the rudder post through the hull, with a drop blade to avoid damage when grounding. 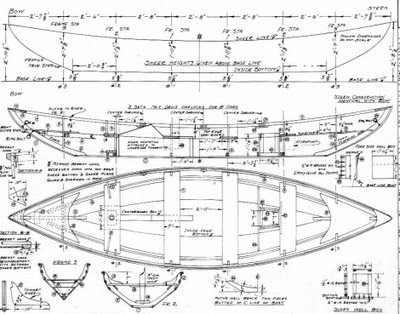 Whether a rudder is really necessary at all in a boat designed primarily to be rowed is moot. Gardner says: "Even with meagre canvas and the relatively clumsy steering oar, the new gunning dory sails surprisingly well."
Posted by Chris Partridge at 10:15