As you all know by now, I am a big fan of the Nokia Sports Tracker application which makes it extremely simple to record where you have been, how fast you were going and lots more. But today's row showed how much slack you have to allow for.
Langstone Cutters club rowing today consisted of Ian, Nigel and me, so we took out Millie, a Teifi skiff that has just been beautifully refurbed by our bosun Geoff Shilling. A few weeks ago she looked a bit tired, poor dear, and now she is a symphony of varnished wood and gleaming white 'glass.
We headed for Langstone Harbour. There are two obstacles, the road bridge and a line of iron caissons that used to support the branch line affectionately known as the Hayling Billy. These are very close together and you have to go through the central opening that used to have a swing bridge to let sailing boats through.
Now, I admit we cut it a bit fine going through (from left to right in the Google Earth image) but not as fine as the GPS track seems to indicate: 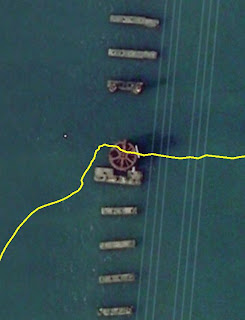 The whole track (at least, that part of the track after the point where I finally remembered to switch the thing on) is here.
PS: The white lines running up and down the picture are electricity cables supported by a particularly egregious and offensive pylon. Last week, it was removed, hooray, hooray! One eyesore down, let's tackle the rest!
Posted by Chris Partridge at 22:05