Rowing facing forwards round the Sea of Cortez 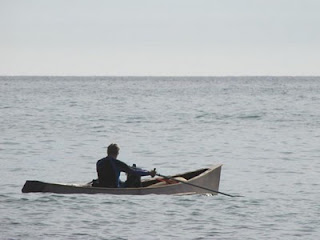 The father and son team Herman and Martijn Stephout have just started a major journey of 1800km down the coast of Baja California (that's the bit that sticks downwards, around the Sea of Cortez, and is part of Mexico). Martijn is paddling a kayak but Herman is rowing an Odyssey 180 designed by Ron Rantilla, powered by Ron's unusual Frontrower. Herman built both boats - the maiden voyage of the Odyssey is pictured above, and the picture below shows the intrepid pair heading out on their first day.
Apparently, the Sea of Cortez is much less wild than the Pacific but not exactly the Thames either, so it will be very interesting to see how Herman copes with the Frontrower. So far, all has gone well except that they made the classic mistake of getting in about three times as much stores as they could fit into their boats, as related in their entertaining blog Baja Paddle. 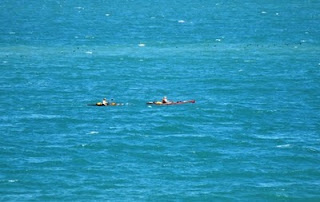