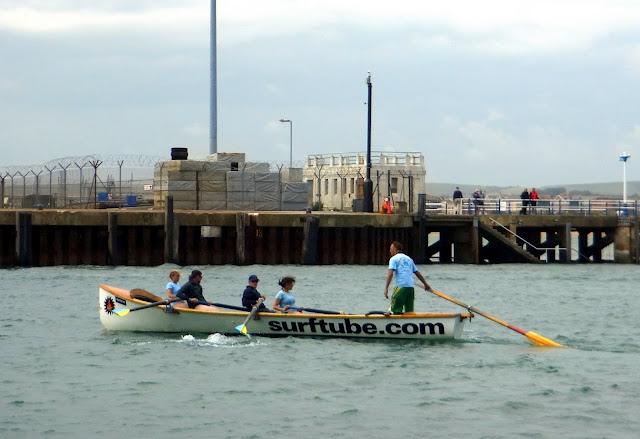 To Weymouth over the weekend where there was a Cornish pilot gig regatta on Saturday and a British Rowing Celebration of Rowing on the South Coast event on the Sunday. 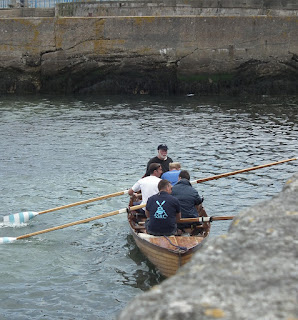 We took Solent galley Bembridge which was the star of the show and much in demand for 'taster' rows.
An Australian surf boat also made an appearance. I didn't get a chance to row in it but Elaine, who did, told me it was very tippy. The steering oar is designed to ensure it can be directed at all times, even when an ordinary rudder would be out of the water.
It was all very interesting, but the point of a surf boat is to boat in surf (duh!) and there is not a lot of that in this country. The general opinion was that surf boats are increasing in popularity because it allows exhibitionists to wear swimmies that would definitely not be acceptable at the Stewards' Enclosure at Henley.
Certainly, she looks a bit out of place with the industrial backdrop of Weymouth's derelict ferry terminal. A far cry from her natural habitat:

I think some of those guys are smuggling Budgies.

Hmm, yes, the "Scroozie-up-the-crackeo" look would be a bit outre at Henley.