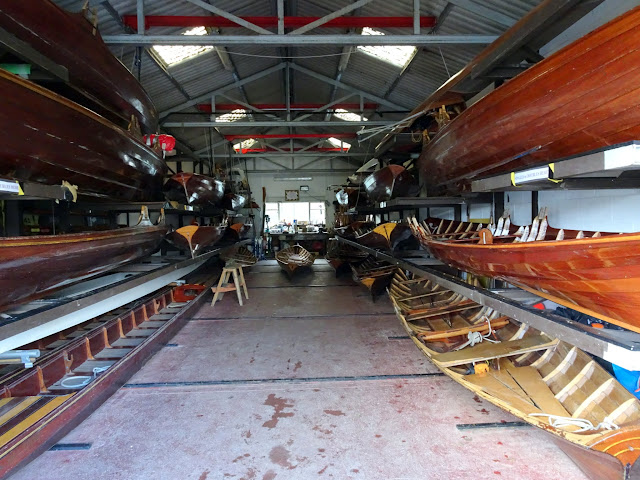 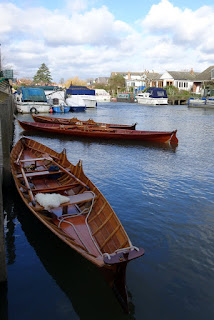 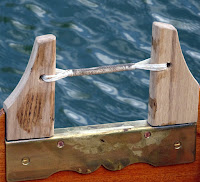 It was a first for me too - racing skiffs do not have rowlocks or round thole pins but flat tholes with a string across to prevent the loom of the oar coming out.
This allows the rower to put the power on with confidence but it has the drawback that you can't easily bring the oar out in emergency. So the technique is to manoeuvre the boat with the blade sitting on top of the string and bring it under when you set off in earnest. It is a bit of a faff for the first time, involving taking the handle outside the tholes, taking care not to let go, bringing the handle in and twisting the blade to corkscrew the button under the string. You get the hang of it eventually.
Fran and Dave took me up to the Ye Olde Swanne pubbe in Thames Ditton, a three mile row mainly with the home park of Hampton Court Palace on the north bank. Then we came back. The sun shone. It was fantastic.
Posted by Chris Partridge at 17:57

It always surprises me that traditional types of rowing, especially such as this where the oarlocks / tholes are closed, insist on rowing with buttons on the oar looms.
It really isn't necessary, doesn't take much effort to learn to row without while not pulling the loom in and out.
Even Olympic rowers (who let's face it are as close to professional as it gets these days) seem to find it a major problem.
It seems a pity that the St Ayles skiff brigade seem to have opted largely for rowing with cabes and hence not even feathering. They'll never really get the best out of their boats rowing this way.

The buttons on Thames Skiffs are not simple affairs but have a helical shape that, when slight outward pressure is maintained, bears against the brass plate in the picture. This pretty much automatically feathers the blade at the end of the stroke then resets them square for the catch. It is a marvellous system.

I've seen them, the chairman of a local rowing club had a Thames skiff.
The gunwales are very lightly built, like a pilot gig, so catching a major crab risks ripping the rowlock block out as the oar is "tied" in.
With a gig, if you're quick, you can just lift the oar clear of the pins, avoiding serious damage.
Having said that, these days, Cornish flashboats and skiffs mostly use a closed ring oarlock rather than thole pins, so run the same risk.
I guess the point is that gigs are used in far rougher conditions where the chances of such an incident are that much greater.
I've always found that the gig stroke, by it's action, initiates the feather at the end of the stroke semi automatically, without the need for such an aid.
There's always been a lot of sneering from sliding seat rowers in this part of the country, towards gig rowers, accompanied by condescending comments such as, "Oh well, I guess they'll learn to row properly one day".
I on the other hand, have come to the conclusion that Cornish fixed seat rowers of the past were very clever guys, who really knew what they were doing, and developed a rowing system which overcomes many of the inherent problems encountered by traditional rowers, especially in rough conditions. Albeit with the odd "blind alley" along the way.

In response to Matt's comment in his first reply, I think I had better speak up for the "St Ayles skiff brigade".

The oarlock system on the St Ayles is a development aspect of the class. As long as the fittings are made of wood (well, wood and epoxy to be fair), clubs are free to develop the oarlocks as they see fit. Development does not take place on the basis of what looks nice, what is traditional, what gives an elegant stroke, or what other classes do. Development takes place on what wins races. My own club, and several others copied the double pin system from Cornish Pilot Gigs. We were repeatedly beaten by clubs using sytems with a single pin, round which the oar pivots, with a fixed amount of inboard. These systems cut out "slop" and prevent rowers from skiving off (no doubt unintentionally) by reducing their gearing. So we changed to such a fixed system, and hey presto even with the handicap of no longer being able to feather we started winning races, and folk started copying our system. As it remains a development aspect of the class, someone may well manage to develop a system which gets the best out of the single pin, but also allows crews to feather their blades. We shall see.

However I am afraid that Matt, in telling the St Ayles skiffies that we will never get the best out of our boats, is rather falling into the very habit that he is criticising slide seat rowers for: "Oh well, I guess they'll learn to row properly one day". I don't deny that St Ayles is a young class, and that most of our rowers have been rowing for less than 6 years, but give us some credit for the amount of effort we have put in to learing our craft.......... and building our craft, and the oarlock systems that go with them.

And if you think you can do better, do feel free to build a St Ayles skiff and show us how to row one properly (remembering of course that they are 10 feet shorter, a bit beamier and have 2 less rowers than a Pilot Gig, so best not assume that you are best to row them in exactly the same way). One St Ayles in build in Devon and one in build in Cornwall at the moment.

Delighted that you enjoyed your skiff, Chris! To contribute slightly to the discussion about oarlock/thole design, first, I have been racing Thames Skiffs for around 20 years, and plenty of crabs have been caught (although the more normal error made is to "slip a button" i.e. get it outside the gunwale) and I'v never seen any associated damage to the gunwale of the boat, but they are indeed designed to be used on the non-tidal Thames and not in rougher coastal waters.
Second, we only put strings on racing skiffs. We don't bother with them in touring boats and if we're taking our racing boats on tour (skiffers use the word "Meander" to describe the most traditional tour route form Lechlade to Teddington along the entire navigable, non-Tidal Thames), we cut the strings off because it's simpler, as you've observed, when getting in and out of locks, when we stand up and "dongle" with 1 blade (SUP-style).