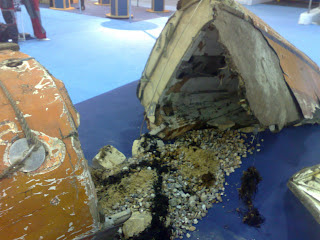 Just in case anyone gets the impression that rowing across an ocean is just a matter of slogging away until you get to the other side, and if you get a bit fed up all you have to do is press a button to be rescued, the Ocean Rowing Society showed some examples of what the seas can do to man and boat.
Two bits of Britannia II, a strong fibreglass monocoque designed by Uffa Fox and built by Clare Lalow, were on display. She had an outstanding record, being rowed across the Pacific from San Francisco to Australia by John Fairfax and Sylvia Cox in 1971/2, and across the Atlantic in 1974 by Peter Bird and Derek King. Peter Bird then rowed her across the Pacific but ran on to the rocks of Maui. 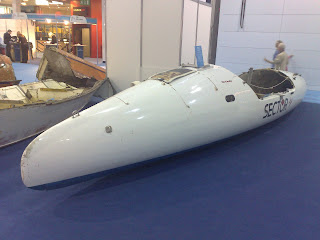 Also on display is Sector Two, the boat Peter built himself to a design by Nic Bailey for the first West to East, continent to continent crossing of the Pacific. He made several attempts, the last in 1996 ending in disaster - the boat was found floating upside down and empty by the US Coast Guard. 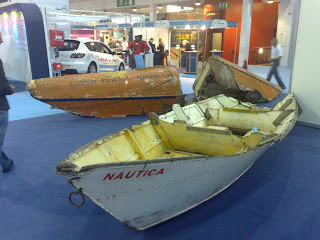 Nautica is a particularly depressing exhibit. At only 22 years old, Andrew Wilson was the youngest person ever to attempt a trans-oceanic row in Nautica, which he had designed and built himself. He set off from Newfoundland in 1980 and was never heard from again - the boat was washed up on the Scottish coast the following spring.
Posted by Chris Partridge at 07:40