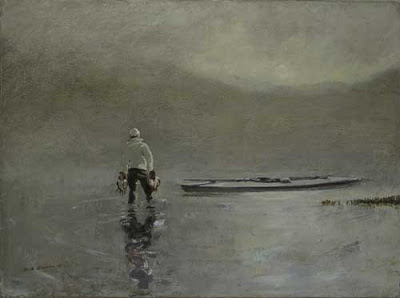 The subject of punt gunning has resurfaced. That prolific correspondent A. Nony Mouse has left an interesting comment on my post from the Broads Museum, and Eugene Molloy sent this (the blue sections are from my post):

I've just had my attention drawn to the punt gunning piece on your blog.

As a one time punter I'm always pleased to see the sport referenced and thought the pictures were great .... but the accompanying text contained very many inaccuracies, so many indeed that anyone with real experience of punt gunning would find the piece laughable. You might care to amend it if you value your reputation.

The punt (the lower boat - the other is a play boat made in Sussex) is 17ft long and carried a 1.5in gun. The gun was loaded with a pound of black powder and about 2lb of shot. Any old scrap metal could be used but the usual charge was mixed nails. The basic science of punt building was laid down in the 1880s by the splendidly named Sir Ralph Payne-Gallwey, and has been developed since. Even using modern building materials there is no way that a 17.5 foot punt could carry a gun heavy enough to throw 2 lbs of shot,  8 to 10 oz would be more like it. Scrap metal was not used, that is a myth These were professional market hunters for the main part and knew that lead shot was the preferred load; it killed cleanly and efficiently. The birds had to be presented to the market and having them shredded by nails (which would in any case severely damage the gun) is a ludicrous claim.

The hunter would lie prone in the punt and stealthily row towards the roosting birds. When in position, he would knock the side of the boat sharply with the flat of his hand to send the birds into the air. Then he would pull the trigger, causing a tremendous blast and pushing the boat back as far as 25 yards. The punt when approaching fowl is either paddled (single butter pat type paddles, one in each hand) or sculled. Making the birds jump is an unusual tactic, normally they are shot whilst either on the water or mud. A punt recoils around 2 feet at maximum; just do the physics and you'll see that is so. Equal and opposite reactions and all that stuff. Additionally the replica gun in the snap has no "breeching rope" so it could not in any case transfer energy to the punt. being unrestrained, it would however undoubtedly kill the firer!

After that it was a question of clearing up. The dog would fetch the dead birds, and the wounded would be finished off with a shotgun known rather bluntly as a 'cripple-stopper'. Most unusual  to have a dog when in a punt, from both a safety and a utility point of view. I've only seen dogs in punts when they were being transported from one part of the salting to another.

Concern over the number of wounded birds led to a ban on 1.5in guns, after which only 2in guns were allowed. The exact reverse is true. 2" guns are unlawful, 1 !/2" guns are lawful. Concerns for quarry were not part of the process leading to that decision.

Punts are still being built and used by shooter / craftsmen in the county; as a boating and sailing enthusiast you might well be interested contacting some local wildfowling associations with a view to meeting these guys and examining their craft so that you can make a more accurate assessment of puts and punt gunning.

It's great to get feedback from people with practical experience of this fascinating sport which very few people know exists. There is little information on the Web. Most of the information I used for my post was taken from the Museum exhibits, so I suspect there are many ways of operating a punt. I must admit I did wonder about the dog (how do you keep it quiet when sneaking up to your prey?) but the description I read was clearly from experience so some shooters must use dogs.
I have tried to contact Chichester wildfowlers but without success - if any of you are reading this, drop me an email. I would love to come out one day to see for myself, if that is feasible.
Posted by Chris Partridge at 17:21