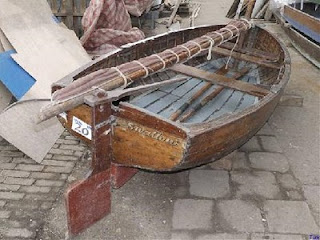 I suspect that the boat that generates most interest in the auction of Turk's maritime film stars will be Swallow, used in the 1974 film of Swallows and Amazons.
Here she is, showing clearly the feature that Arthur Ransome describes in detail - the lack of a centreboard. She had a wooden keel and lots of lead pigs for ballast. 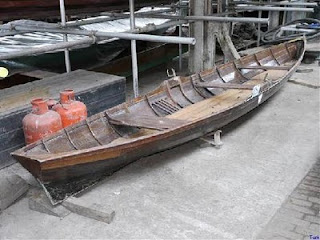 I am hoping that everyone will concentrate on Swallow so I can nip in and bag Winnie, a single skiff built in 1918 by the boatyard and hire firm Bligh of Richmond. It featured in the Dr Dolittle film with Rex Harrison.
Posted by Chris Partridge at 22:27

Good luck on getting the Winnie

and you haven't added a link, so we can't bid against you?

Do try to pay attention, Taylor. I linked to it last time I posted on the auction. Anyway - here it is: http://www.turksauction.com/

Or it's two 25 footers, more or less. You could use them for match racing.

How do they fasten together?