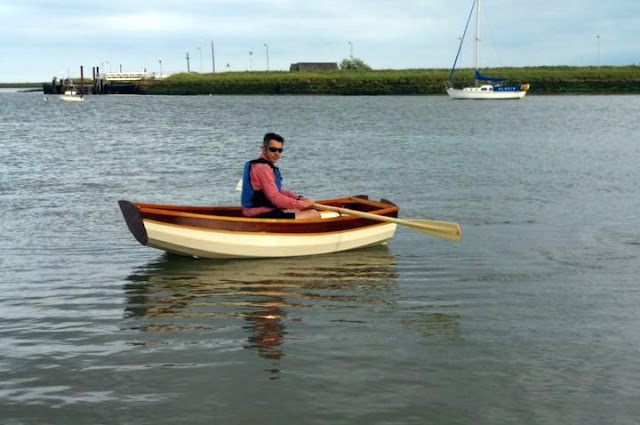 There's been a curious outbreak of prams (more correctly, praams) on Facebook.
I have a soft spot for prams. The front transom gives them a jaunty look and gives them a lot of extra space for the length. Rowing into the wind is not nice, though.
HBBR member Peter Nobes launched his pram Diya (above), after 18 months work. And well worth while - she looks lovely. More pics at the album Diya Launched. 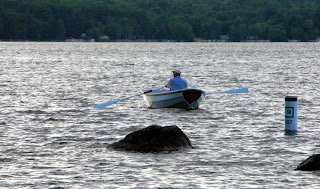 In New Hampshire, Nate Carey launched his Joel White-designed Nutshell at Lake Elkins. The boat is to be raffled today at the 78th annual League of NH Craftsmen's Fair at Mt Sunapee Resort. More pics at the album Nutshell launched. 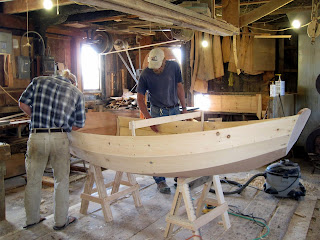 At The Dory Shop in Lunenburg, Nova Scotia, a pair of prams are taking shape in the workshop. Now this is the sort of work environment I would love to have. More images at the album The Dory Shop. 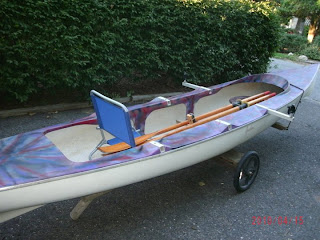 This last Facebook post is not a pram but a sequence of pictures of a really nice evening row from boatbuilder Jake Miller in New Jersey. He found this tie-dyed rowboat abandoned in the reeds, like Moses' basket but happily without any baby prophets inside. Now it is back on the water and looks like total fun. More images at Jake's album An evening row with Judi.
Posted by Chris Partridge at 09:42

I think prams are cute. You can have a look a my homebuilt and homedesigned clinker-ply pram here:
http://www.building-vega-pram.blogspot.com/