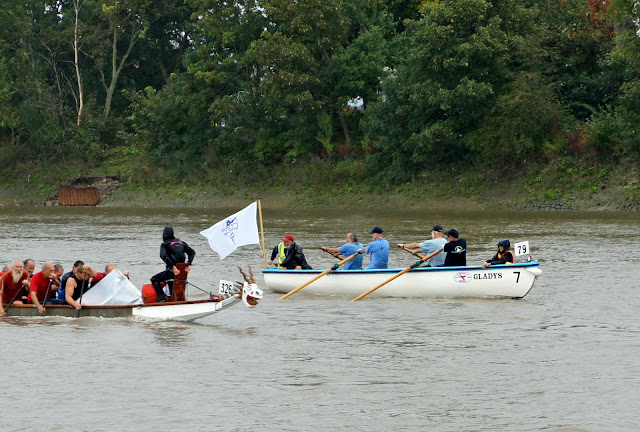 Today Gladys goes to London for the Great River Race tomorrow. The tried and tested team of Mike, Geoff, Alan, Chris, Chris and Chris will defend her eight year record of wins in the old farts Veterans Over 60 class, and the Clayton Cup as well if we can overcome our various infirmities and put our backs into it.
The long heatwave that we have basked in means that, naturally, it is forecast to rain. Again.
This year we will not be flying the club flag but that of a local charity, British Earthquake and Tsunami Support (BEATS) which helps areas hit by natural disasters rebuild. We want to help fund a new classroom at an orphanage in Indonesia, something that will cost just £2,500, a sum that would barely cover the cost of the pupils' footwear in the UK.
So if you want to donate the cost of a pair of trainers to this hugely worth-while undertaking, please go to https://mydonate.bt.com/teams/cutters and press the 'Donate Now' button. The amount raised so far looks a bit pathetic but that is because Langstone Cutters are a bunch of traditionalists who believe in printing the form out and hawking it round their friends and relations, so the money will come in later. For those of you online, please give now!
Posted by Chris Partridge at 07:50