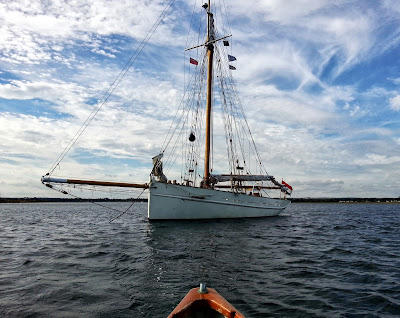 On a different note, the Dutch gaff cutter Brandaen was moored in Emsworth channel for most of the week. She is a member of the Old Gaffers Association and was flying the 50th Anniversary pennant, so she must have been taking part in the festivities though she isn't listed.
Brandean doesn't look very Dutch so it was no surprise to find that she was built by the Arma Marine Shipyard in Brightlingsea to the designs of R. Watts, in 1987. The steel hull is based on the lines of the racing smack Ellen.
She's for sale at €240,000.
Posted by Chris Partridge at 13:41