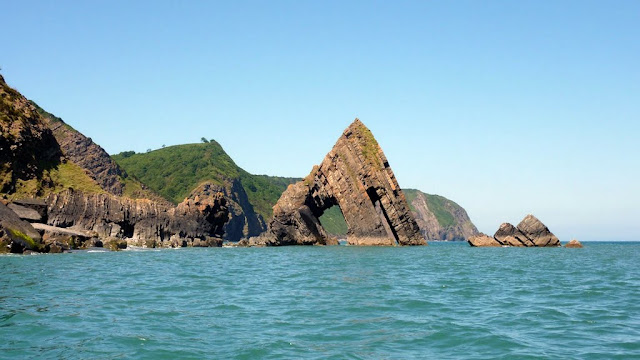 Paul Zink, creator of the Clovelly Scull, has put the North Devon coast up for the title of Loveliest Rowing Waters on the Planet.
As with previous entrants, he makes a point. 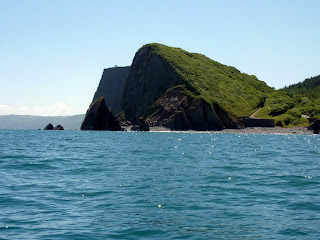 Hi Chris,
I guess we've all been enjoying this summer's exceptionally good weather. The photos above were taken while out rowing my Clovelly Scull in idyllic conditions along the North Devon coast between Clovelly and Hartland Point. I think I must challenge Brian Pearson's claim that the waters out of Keyhaven are the loveliest on the planet. It takes a lot to beat the north coast of Devon and Cornwall, that is if you like rowing on the open sea with spectacular cliffs on one side and the sea horizon on the other with only the occasional porpoise, dolphin or seal for company as well as the likes of razorbills and shearwaters demonstrating their flying skills. In contrast there are days when rowing is very definitely out of the question. The photo on the right was taken just around the corner at Hartland Quay during a winter storm. Maybe Brian could have been out rowing from Keyhaven on that same day! 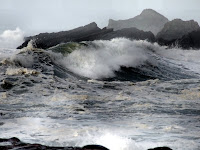 I do have to agree with Brian that Keyhaven is a great place for rowing. It is certainly my favourite out of the various places in the Solent area I have visited. While providing sheltered water in the various creeks and behind the spit it is also a good launch point for rowing over to the Isle of Wight or just going to have a bit of fun with the overfalls in the Hurst Channel during the flood tide.
Trust all is well with you,
Paul

Another major delight of Paul's home waters is the row to Lundy, also known as Puffin Island, a distance of 14 miles. The huge tides in the Bristol Channel makes this a row to be timed with care.
Last weekend Clovelly Pilot Gig Club held their annual Lundy Row. Nine pilot gigs rowed to Lundy on the Saturday morning, spent the afternoon walking the island and the evening in the Marisco Tavern. They rowed back next day, arriving in Clovelly just in time for the Red Lion to open, so a typically rowing time was had by all. There is a full report here.
Posted by Chris Partridge at 21:39