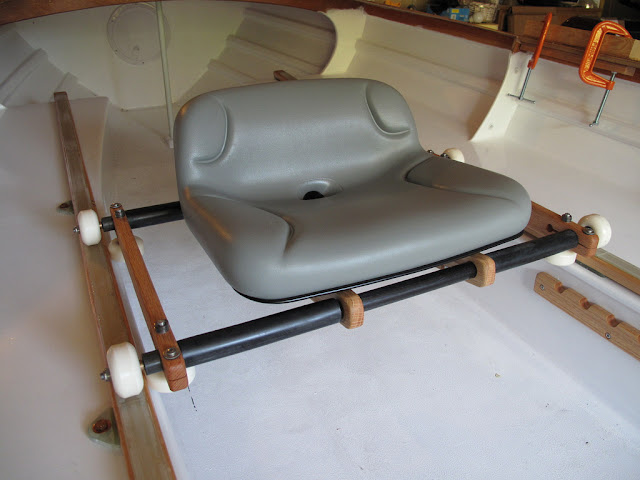 Sliding seats are a big problem for cruising boats, because they take up all the middle of the boat and get in the way when you want to for camp, cook or just laze around. Worse than a centreboard.
Rick Thompson in the San Francisco Bay area has built one of the most interesting rowing/sailing boat designs around, John Welsford's Walkabout. Now he has added an ingenious sliding seat mechanism that runs on the side flotation tanks, leaving the centre well free for other purposes, such as sleep. Rick describes it in the very excellent John Welsford forum thus:


I'm pretty happy with it so far. I know JW is not so keen on sliding seats, and I understand that it probably burns more energy and doesn't do anything to change the hull speed limit on this type of boat. 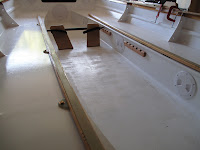 For me, it is a big help to be able to use leg muscles as well as arms and back. Next will be some type of hold-down so the seat can be used fixed as well.
It's really hot here in inland California now, hope others are having good
boating or building weather.
Rick

I have to say I rather agree with John Welsford about sliding seats on long-distance boats. When you are racing over relatively short distances, you need to transmit all the power you can possibly generate into the oars. It is a sprint, so it's anaerobic.
Over longer distances, it is physically impossible to row anaerobically - the power you can produce is limited by the amount of air you can pump through your lungs. And you can produce this power just as efficiently on a fixed thwart as a sliding seat.
If you use a fixed seat, you get the other advantages of better control over the oars in choppy conditions and a more robust and simpler setup. But with the sliding seat, Rick will be able to make a lot of money by challenging fixed seat Walkabout owners to a race to "that buoy and back". Go, Rick! 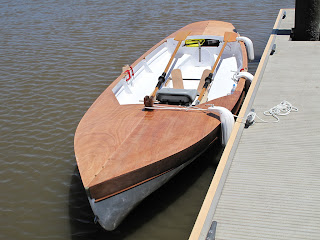 Posted by Chris Partridge at 22:19

I do feel that a sliding seat can help some of us on longer rows, not just for sprints. John Welsford is happy rowing fixed seat for hours, but my back will give out after a while. With a lockable sliding seat, I'll go fixed for a while until tired. Releasing the lock lets a whole new set of muscles take the load. The GPS, which had dropped below 3 kts, jumps back up to 3 - 4 kts again, so it really is helping.
The Gig Harbor Whitehall, my other boat, has a sliding seat with a pin to lock it. I have been using this for several years now.

Hi I live in NY and VT and am trying to find a sliding seat rowboat with a little backrest such as this one. Our VT house is on a lake and I want to be able to get a good work out while being on the lake, hence the sliding seat. But I have a hierniated disc, hence the backrest. Where can I find a boat with a seat like this? Marian