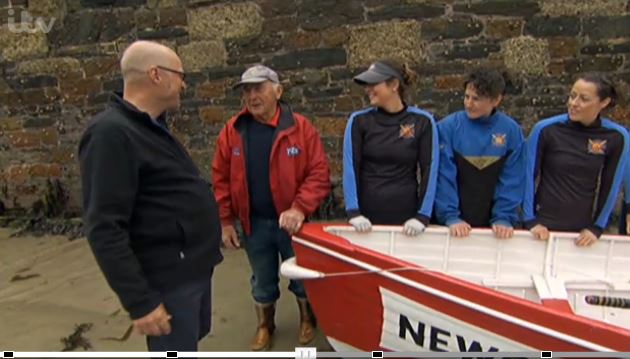 There's been a queue of fading comics heading for the West Country recently to make a bit of easy cash filming soft features for the tourist board. First it was those three guys in a boat that used to do satire, then that woman who was on Jonathan Creek for a bit, and now Adrian Edmondson who was in a couple of sitcoms that I never bothered watching back in the 1980s. 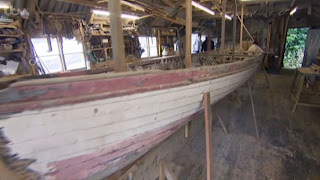 Anyway, in Thursday's Ade in Britain he went to Cornwall and looked at pilot gigs. First he visited Peter Williams, a gig builder in Bodinnick, where he looked at a gig from 1930 that Peter is restoring. He even 'assisted' in a bit of restoration, nailing on a bit of gunwale and steaming a frame. Clearly it was all done for the cameras but actually rather interesting.
Then Ade went rowing with the Newquay women, which was exceptionally brave of him. Not only did he seem to the timing well, he even managed to lift his loom in time to avoid catching a crab, which was slick. Didn't avoid breaking a pin, though.
Keep it up, Ade, and you might lose some of that tum.....
The episode is available here.
Posted by Chris Partridge at 08:00