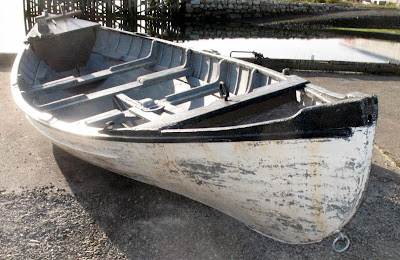 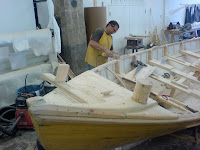 NorseBoats, based in the pretty town of Lunenburg, Nova Scotia, have just completed an interesting commission - six reproduction 19th century whale boats for the remake of Moby Dick, now filming.The boats were built by lead boat builder Scott Dagley of spruce strip planking and epoxy, with one layer of glass cloth on the outside of the hull and ash frames and a partial second layer of spruce planking on the inside of the hull. They were then 'distressed' by the movie props people to look as though they had been used daily for hunting whales.

The whale boats are currently in the Mediterranean, near Malta, where the sea scenes will be filmed, which is probably cheaper than going to the Antarctic.
Moby Dick contains more detail about life on a Victorian whaling ship than you could conceivably want to know (which is why it is so long), including this wonderful description of Stubb, the second mate, taking one of the boats out. His coxing technique is eccentric to say the least. The illustration is Rockwell Kent's famous woodcut from the 1930s:

"Pull, pull, my fine hearts-alive; pull, my children; pull, my little ones," drawlingly and soothingly sighed Stubb to his crew..... "So, so; there you are now; that's the stroke for a thousand pounds; that's the stroke to sweep the stakes! Hurrah for the gold cup of sperm oil, my heroes! Three cheers, men--all hearts alive! Easy, easy; don't be in a hurry - don't be in a hurry. Why don't you snap your oars, you rascals? Bite something, you dogs! So, so, so, then: - softly, softly! That's it - that's it! long and strong. Give way there, give way! The devil fetch ye, ye ragamuffin rapscallions; ye are all asleep. Stop snoring, ye sleepers, and pull. Pull, will ye? pull, can't ye? pull, won't ye? Why in the name of gudgeons and ginger-cakes don't ye pull? - pull and break something! pull, and start your eyes out! Here," whipping out the sharp knife from his girdle; "every mother's son of ye draw his knife, and pull with the blade between his teeth. That's it - that's it. Now ye do something; that looks like it, my steel-bits. Start her - start her, my silverspoons! Start her, marling-spikes!" 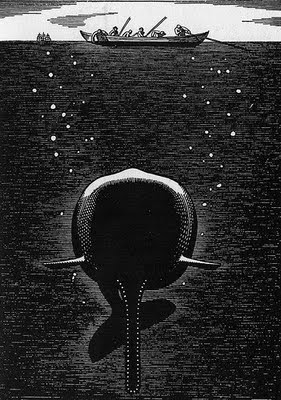 Stubb's exordium to his crew is given here at large, because he had rather a peculiar way of talking to them in general, and especially in inculcating the religion of rowing. But you must not suppose from this specimen of his sermonizings that he ever flew into downright passions with his congregation. Not at all; and therein consisted his chief peculiarity. He would say the most terrific things to his crew, in a tone so strangely compounded of fun and fury, and the fury seemed so calculated merely as a spice to the fun, that no oarsman could hear such queer invocations without pulling for dear life, and yet pulling for the mere joke of the thing. Besides he all the time looked so easy and indolent himself, so loungingly managed his steering-oar, and so broadly gaped - open-mouthed at times - that the mere sight of such a yawning commander, by sheer force of contrast, acted like a charm upon the crew. Then again, Stubb was one of those odd sort of humorists, whose jollity is sometimes so curiously ambiguous, as to put all inferiors on their guard in the matter of obeying them.

NorseBoats are proving very popular for raiding, as they sail and row well, but a version aimed more at rowing is on the way, according to founder Kevin Jeffrey who writes:
"These boats have great hull shapes for rowing, and any of them can be set up primarily for rowing, with the sail kit a less sophisticated affair. In addition, we are creating a recreational rowing version of the 17.5, with lower profile lightweight hull and double sliding seat rowing. I'll send you more info as this product gets developed."
That should be a very interesting development.
Posted by Chris Partridge at 23:24