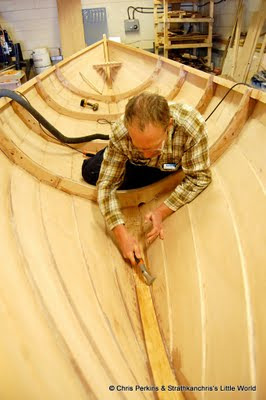 Chris Perkins reports on his final week at Alec Jordan's shop in Fife, working on the prototype St Ayles Skiff:

"My last week on the project was spent cleaning up the inwales, building a temporary cox perch and generally helping fit the furniture and titivating. Each time this stage is reached in a build I am amazed at how much time is absorbed removing material. Work that will never be appreciated by anyone who has not got that particular T shirt but is immediately apparent if it is neglected. The route to a respectable finish always lies in the preparation - a truism that can never be said often enough in my view. The snaps include a couple of high level shots showing the almost structurally completed boat, just the breasthooks to fit at that stage (now done), obtained by some precarious ladder work by Alec in the upper reaches of his workshop. The cox's seat is a temporary affair until the positioning of feet and seats are proven on the water after

which the buoyancy compartments will be retrofitted - space is pretty tight and it would be easy to get positioning wrong in a static environment, we really need to see the dynamics of the interaction of the various bodies to establish best position. The week passed all too quickly and my time on the build was over - altogether a fascinating few weeks which has transformed my view of kit boats - I am extremely grateful for Alec's invitation to join in the build which I hugely enjoyed. So much so that I have put my name down for the Ullapool group aiming to build the first West Coast St Ayles Skiff, not sure I have the spine to be an oarsman though. Alec has now started applying the finish, varnished gunnels and thwarts with the rest of the hull painted so it shouldn't be too long before I head down to the other end of Scotland to see how she looks on the water."

Chris - you can do it! The only downside to rowing is that it is as addictive as crack cocaine. There is nothing like being part of a crew on song, and you don't even have to be particularly strong or athletic. And there is the joy of getting fit out on the water, without having to endure the prison ship conditions in the average gym or do your knees in running. 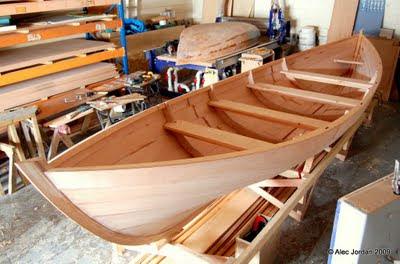 Posted by Chris Partridge at 21:22