A Norwegian style boat from the US 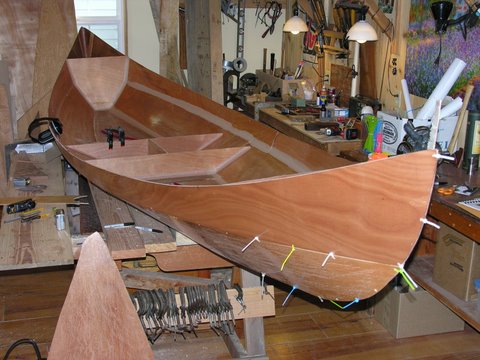 Paul Butler of Port Angeles in Washington State has a wide range of rowing boat designs including a Montana Guide Boat (which looks rather like a duck punt) and the Maxi Mac drift boat, which looks great for river fishing.
His latest design, the Norwegian Gunning Dory, is a stitch'n'glue restatement of the Norwegian faering. Bow and stern are flared upward in a very confident way. I asked Paul if the prominent ends catch the wind, and he replied:

"I have two prototypes in the water, and I will still make a few changes in the building plans but only very small adjustments. The ends of the bow will undoubtedly catch a bit of wind, but possibly because both ends are almost identical they seem a bit more balanced than previous versions. I think most of the people who have rowed the boats just like the look of that sweeping sheer, and quite possibly they are willing to sacrifice a bit of windage for style. I'm not really sure, but I've no particular problem with the boat in moderate open water wind chop. I'm an advocate for skegs in open water rowing boats rather than longer keel structures, as I feel they are safer in preventing the boat "tripping" if caught sideways on a wave. My second prototype also has a different interior layout with port and starboard compartments to support adjustable seating for one or two people." 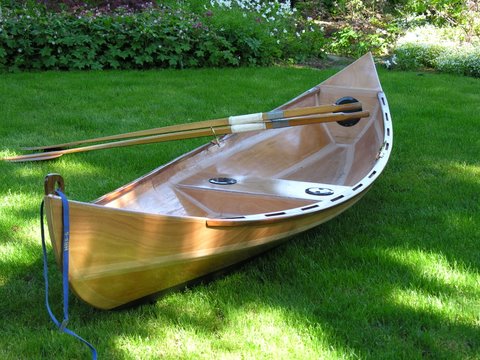 Posted by Chris Partridge at 20:13

Paul works just a few hundred miles from me, but I've not seen his work yet, thanks for this!
I love the sheer, but as you say, it might not be practical. Beauty is often in conflict with practicality. I doubt I'd be confident enough to use my taping joints as an accent, and being the more conservative type would leave out this detail, but Paul seems to pull it off with effect.