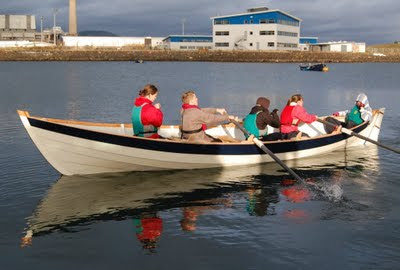 The prototype St Ayles Skiff hit the water for the first time on Saturday, at Methil No3 Dock in Fife. She was lowered in by crane, but builder Alec Jordan (who sent the pics) says he can lift the end of the boat by himself without a problem so it should not be difficult for a crew to carry the boat to the water.

Rowers from Methil Sea Cadets and from various interested parties took her round the dock.
"She rowed like a bloody dream," Alec said. She looks a dream too - another classic from Iain Oughtred.
The official launch is next Saturday at the Scottish Fisheries Museum at Anstruther - there may be a chance to try her out for yourself at the event. Email Alec for details. 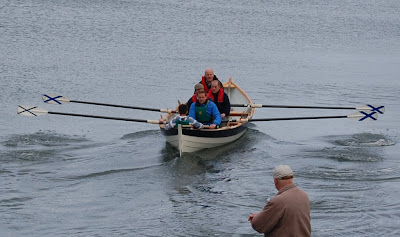 Committee boat: (from bow) Topher Dawson of the Ullapool syndicate that has already ordered a Skiff, Tam Christie from E Wemyss who has helped build the boat, Alec Jordan (and his flat cap), and Robbie Wightman, Steering Group Secretary; David Aitken of Methil SCC coxing.
Posted by Chris Partridge at 09:42