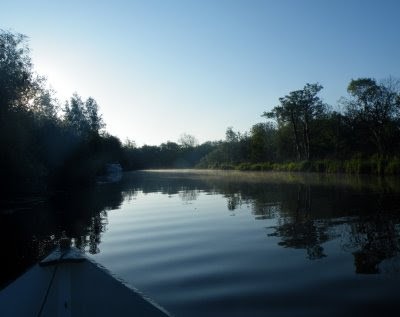 The new camping arrangements on my Sandpiper Nessy got their first use over the weekend. I slept aboard on Saturday and Sunday nights at Barton Broad, venue of the first Home Built Boat Rally of 2009.
The rally was based at the Barton Turf Adventure Centre, and what a great place it is with everything you need for a boaty weekend - slipway, staithe and showers. And the weather, uniquely for an HBBR, was brilliant - sunny and with just enough wind to keep the sailors happy.
Nessy's tent worked well except for the entrance being only exactly the right size for a big bloke who isn't quite as limber as he used to be. I had the tent down round my ears a couple of times.
But the big mistake was leaving my mobile in the car. So when I woke on Sunday morning to a noise I originally put down to the Red Arrows doing low level aerobatics but was in fact the dawn chorus, I had no way of telling what time it was without dressing and trudging up to the car park. To my horror I found it was 5am, but I was well awake so there was nought for it but to strike the tent and head off for an early morning row up the River Ant to Stalham (two miles). I haven't rowed that early since Dad used to drag us out on the Thames at bonkers o'clock back in the Fifties. 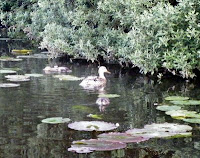 The sun was burning the mist off the river. Everything was peaceful and still. Ducks with flotillas of chicks foraged among the lilypads.
I had vaguely hoped that Stalham would have a greasy spoon cafe offering the sort of breakfast I am banned from having at home, but it was dead to the world when I arrived. I had four Hobnobs and a swig of water. Until I got back to BTAC and found that I was just in time for one of Simon and Sheila Fishwick's monster plates of egg, fried slice, beans, sausages, hash browns and more sausages. Bliss.
Posted by Chris Partridge at 16:43