More on the Bursledon Gig 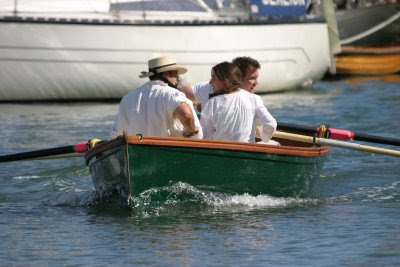 Boats get labeled in some odd ways. The Bursledon gig started life as a Falmouth workboat that ended its days donating its body as a plug for Cygnus Marine's CY15, made for years on the Fal.
Then the Bursledon Regatta committee got concerned about the lack of rowing on the Hamble. Jim Chadwick-Williams takes up the story:

"When the Regatta discovered that rowing was dying, about 10 years ago somebody bought four shells from Cygnus Marine. On the back of enthusiasm generated by re-fighting Trafalgar with 45 three-masted Mirrors under oars in 2005, I was Regatta Chairman and got fed up with people saying there weren't enough Gigs. So I was Cygnus's biggest customer for their CY15, before they went into liquidation. Its advantages to us were that it is manoeuvrable in the river, can be used for family picnics and is good for Sea Scouts because you can put up to seven in a boat and only have one safety boat. With fast sailing dinghies you need almost as many adults as Scouts.
There are fourteen on the river now and we are thinking of doing another batch as there is new interest, and we might get Sea Scouts interested as part of their curriculum is to learn about 'pulling'."

The next Bursledon Regatta is in August - see here for details. A pirate theme - I suspect that dinghies up and down the Hamble are being converted into miniature Hispaniolas and Black Pigs.

Posted by Chris Partridge at 08:05

To be strictly accurate, the CY15 mould wasn't actually taken from a working boat.
It was roughly based on the Falmouth Working Boat's dimensions and lines, but is a bit fuller and more stable.
A few of the more lightly built examples are still raced in specific classes at local CRA regattas.
Excellent little pulling boat.
I had one built and fitted it out for the gig club for which I was rowing at the time.
Wish I had one now.