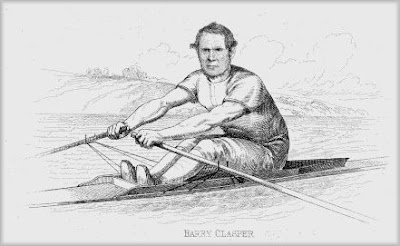 Tynesider Harry Clasper (1812-1870) was one of the great innovators of rowing and well as a great champion. He started his working life as a miner, but after an explosion at the pit decided he preferred working on the surface and became apprenticed to a ship's carpenter, which provided him with a valuable insight into boat design and construction.
His family then moved to Gateshead and Harry became a wherryman, developing his rowing skills. With two of his brothers, he raced a coxed four with considerable success.
He earned enough prize money to take over a pub, the Skiff Inn on the Tyne, combining the pub with a boatbuilding business. He began to experiment with lightweight construction and the newly-introduced outrigger. 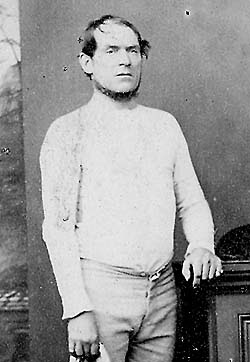 Clasper's insight was that light boats displace less than heavy boats, reducing the wetted area of the hull and therefore the friction. He placed the keel inside the hull to cut out the drag from that source, and the hull was French-polished for the ultimate smooth finish.
Harry also saw that adding outriggers did not just allow the rower to swing a longer oar - it also enabled the boat to be really, really thin. The 'floating toothpick' was born.
The first boat to incorporate these innovations was the Five Brothers, which he rowed with an all-Clasper crew. With this boat, Clasper was unbeatable on the Tyne and began to have success on the Thames, coming second in the Thames Regatta in 1844. His next boat, the Lord Ravensworth, made the Claspers World Champions at the Thames Regatta in 1845 against a boat led by the legendary Robert Coombes.
Clasper was an instant celebrity in Newcastle. Local music hall artist J.P. Robson even wrote a song in his honour:

Ov a' your grand rowers in skiff or in scull,
There's nyen wi' wor Harry has chance for to pull.
Man, he sits like a duke an' he fetches so free,
Oh! Harry's the lad, Harry Clasper for me!
Haud away, Harry! Canny lad Harry!
Harry's the king of the tyems an' the Tyne.*

Clasper was also champion sculler on the Tyne, using sculling boats he designed on similar principles, but somehow he never managed to win on the Thames. He died in 1870 and so great was the crowd at the funeral the cortege got stuck and his coffin had to be transferred to a barge and, appropriately, rowed up the Tyne one last time to the church at Whickham where he was interred beneath a splendid tomb.
More on Harry Clasper can be found here, here and here.


*If you are having trouble working out what this means, see www.geordie.org.uk.
Posted by Chris Partridge at 20:53