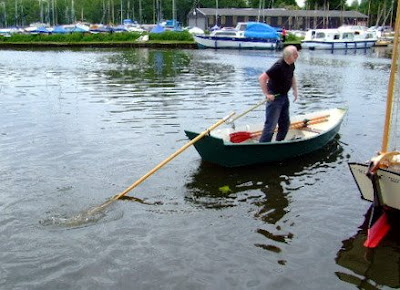 The HBBR at Barton Broad was a brilliant opportunity to give the new Scullmatix a proper workout in calm, non-tidal waters (thanks to Ian Rushton for the picture). This time, Nessy was also fitted with a crutch on the transom to grip the shaft of the oar properly, unlike the sculling notch which allowed the oar to pop out far too readily in my first experiment.
The Scullmatix was fixed to a long oar I happen to have around, plus a bit of round fence post from our local garden centre.
It balances quite nicely on the crutch, with the handle close to my hand when standing in the middle of the boat. I suspect this may hold the oar at too shallow an angle to the water for greatest efficiency but I will play around with this in the next few weeks.
One thing that is abundantly clear is that Nessy is too short and light for sculling to be really effective. The boat tends to swing from side to side wildly, and is difficult to steer without pulling the blade right out of the water and moving it to a new position. The device is probably much more effective in shifting a heavier boat. It would be handy for propelling a yacht out of a crowded harbour, for example.
But it was very much easier to get the hang of it than using a regular sculling oar, and much easier on the wrists too. Here's a video taken by Chris Perkins of me swanning about at Barton Staithe.

Posted by Chris Partridge at 20:47

Maybe a skeg could help on a little dinghy, or a dagger board or so... But your stand-up style is already wonderful ! ;-)

nb : you should put the scullmatix directly within the notch of the transom (or within an oarlock) to obtain better and easier results.

Thank you for your help since the first times.

scullmatix is a rather sorry way of owning a self feathering oar. Log on to www.scullingoar.bravehost.com/ and find out how to build a powerful and elegant oar. Scale it down a bit for small boats, 8 feet long works well on our Wayfarer

Cliff, you can think what you want of course, but I have to tell that the ScullMatix is the fastest and easier way to learn single oar sculling, and also the fastest and easier way to obtain a good and efficient sculling oar from one standard oar.
Of course your website is interesting, and for sure to build our own sculling oar - as to build our own boat - is also a great adventure.