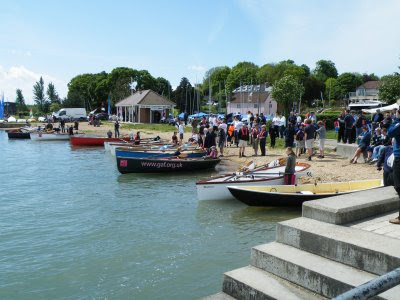 Langstone Cutters put up two crews for the Hamble River Raid organised by the Sea Scouts today. We borrowed a couple of Bursledon gigs, which have three rowing positions and can be rowed by three scullers, six or four rowers, or randan, with rowers at either end and a sculler in the middle.
The boats started at two minute intervals off the beach, heading upstream to the Jolly Sailor and back. 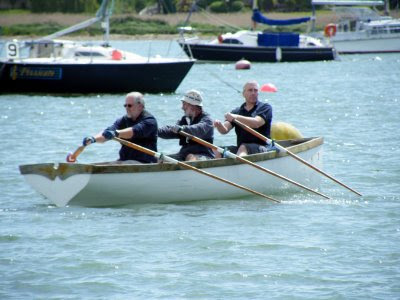 Here is the Langstone A crew (Steve, Nigel and Steve) setting out for a quick practice. They elected to scull uncoxed, using the lightweight oars from the Cutters' Teifi skiffs. The B crew (Dawn, me, Mark, with Julia coxing) went randan. 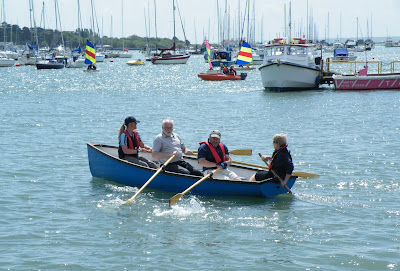 This may have been a mistake as the oars we were supplied with were much smaller than the crutches on the boat, and the plastic buttons were extremely floppy so blades were continually falling through and having to be retrieved.
I was struggling at the sculling position, because you can't keep an eye on both rowlocks at once. At the end of the race my wrists were aching because the oars never stayed in the same part of the crutch and had to be corrected all the time. 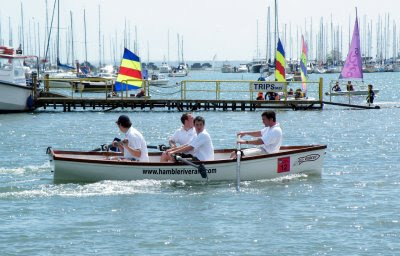 The winners were Exocet, with four rowers, a crew that had youth, skill and training on their side. And carbon fibre blades in the correct size swivels with gates so they could put pressure on, which they were certainly doing as they passed us in style. 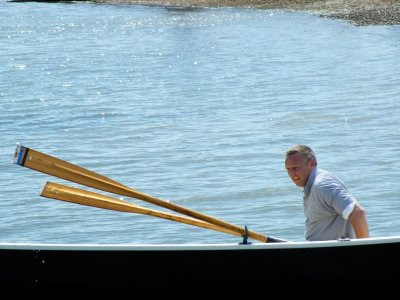 The winner of the 'odds and sods' race for non-gigs was Max Taylor in his single skiff. 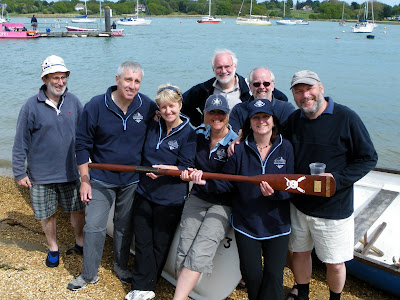 And here are the Cutters with the trophy for fielding the oldest crew, with a combined age of 205.
The sun was out (I am pink as a lobster), the hog roast was superb and the ale just right. We all had a great time.
Posted by Chris Partridge at 18:32