All done by Mirrors 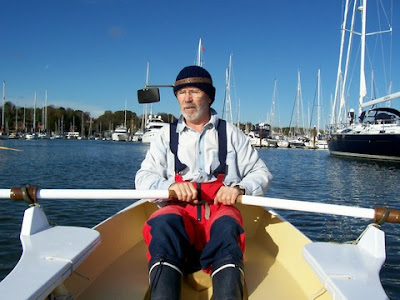 Chris Waite, who is a man of infinite-resource-and-sagacity like the Shipwrecked Mariner, was sporting a self-designed rear-view mirror at the Amble up the Hamble on Saturday. It was knocked up from an old belt, an old TV aerial and an old wing mirror. However, Chris was disappointed with performance as he reported on the HBBR forum:

"Despite the proximity of the mirror to my eye, the view is still quite limited, so it is necessary to move your head around to check the wider view of approaching impediments. The added problem is that everything is back to front, so all your head movements need to be reversed to obtain the necessary information.

This then has to be translated to pulling on the oar that will move the bow of the boat the other way to the way you are seeing it as you are not only sitting the wrong way round, but looking backwards as well and having to move your head rather than your eyes as they need to stay fixed on the mirror and ingnore the oscillating view astern, in order to scan the scene ahead.
My ageing grey matter could not cope.
Not even slightly." 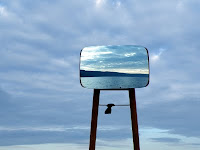 I have never really liked mirrors. They don't give a good enough idea of what is ahead so you have to look round fairly frequently anyway. The closest thing to a useful mirror is on the Clovelly Scull, where it is mounted on a bipod mast so it is just above your head, so you get a good view straight in front which is handy for both navigation and spotting immediate peril. The mast is also a good place to mount a GPS.

This is Paul Zink demonstrating it.
More on this in the upcoming issue of Water Craft, so subscribe now!
Posted by Chris Partridge at 14:52

Chris,
A left over from my days as a endurance cyclist is a little mirror that clips on the temple of my eye glasses. I recently tried it on a trip on a local river, which winds considerably and is hard to track looking backward.
On the road, the mirror is effective in spotting traffic and keeping track of other cyclists. On the river, it is much as Chris reports. I am quite used to the reverse image thing, but spotting obstacles, trying to find other rowers and generally keeping course wasn't easy. I still had to swing around to verify my course, but not so often, which was a relief for my aging neck muscles.
doryman

Chris,
I modified a 3" plastic spring clamp (Cheap!!) (re-contoured the jaws a bit, attached rubber padding cut from a doorstop with goop), bolted on a foot section of 3/4 inch plastic plumbing tube (more marine-goop), and a mirror from an auto supply store. (total cost about $20 Canadian)

I clamp it on my starboard gunwale a couple feet astern of my outrigger.

Before, I had the mirror attached to my running light stalk that clamps to my motor pad on the transom.

The "Front View Mirror" is best for lining up sight-lines for rowing in openish water, one landmark over the transom, one land mark in the mirror. I still have to twist around to check bearings and make sure I am not going to run over canoeists and kayakers. The best solution, have a pretty passenger in the stern seat (who has a clue) to point to clear water.

Thanks, Rob.
Have you got a picture of your mirror arrangement? If so, could you email one over?
All best,
Chris