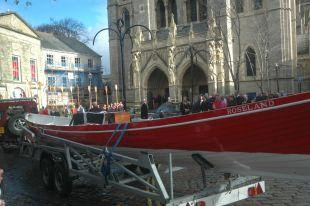 His coffin was drawn to the service in Truro Cathedral in one of his own creations, the pilot gig William Peters, built for Roseland in 1987. An honour guard of rowers raised oars at the doors of the cathedral. 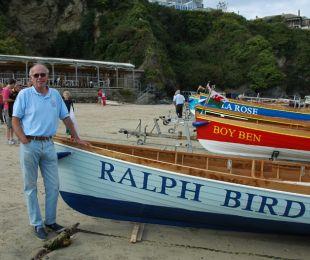 But perhaps his greatest tribute was in 2007 when he finally retired. All 29 pilot gigs he had built over the decades assembled in Newquay for the launch of his last gig - named Ralph Bird. It was a remarkable tribute to a remarkable man.
I interviewed Ralph for The Times shortly after he reitired. This is the article:


Ralph Bird saved pilot gig racing from terminal decline in the most practical way possible: he built the boats for clubs to race.

And they are things of beauty, graceful 32ft boats with elegant sheer lines copied from the pilot gig Treffry, built in 1838 and still raced by the Newquay Rowing Club.

Bird has built 29 of them in his long career, each traditionally constructed from solid elm. No plywood or fibreglass is allowed if the boat is to compete.

“Sticking to tradition is one reason why the sport has been so successful,” Mr Bird believes. “Boats have been raced for 200 or 300 years.”

He chaired the meeting that set up the Cornish Pilot Gig Association back in 1986, when it was realised that gigs had to be standardised if racing was to be put on a proper footing. His simple specification has governed pilot gig building ever since.

The resurgence of pilot gig racing has been spectacular, with 125 gigs registered and regularly competing.

Last year, Ralph Bird finally retired from building, but still acts as president of the CPGA. He sees the sport as strong for the future despite the general decline in craft skills and the uncertain future of wood stocks.

“There are a few builders still,” Mr Bird says. “Four or five new gigs are being built this winter, and although Dutch elm disease wiped out Cornish stocks of the wood, we can still get supplies from Denmark.”

Its openness is one of the attractions, he believes: “It is not a male dominated sport, anyone can race, men and women, children and veterans.”

And there is the social side. He is looking forward keenly to the Scilly Isles in May.

“I’ll be at the World Championships,” he says. “It is a great social event as well as great racing.”


Photos from Boating Cornwall.
Posted by Chris Partridge at 22:41