Building a boat in 1min 41sec

Chesapeake Light Craft in Annapolis (named after our own dear Queen) makes a rather enticing Northeaster Dory, a remake of the classic fishing vessel for recreational rowing. They rightly point out that the dories described in classics such as Captains Courageous were designed to be cheap, stackable and easy to deploy, and only acquired their legendary seaworthiness when you had a ton or so of cod in the scuppers.
So dories have evolved to cater for recreational rowers, and the Northeaster Dory is intended to be light, easy to row and seaworthy without all that fish.
CLC run boatbuilding classes and have produced a great time-lapse film of one of them, in which you can see a line of Northeaster Dories taking shape before your very eyes.
And here is a picture of Antone Konst proudly rowing the boat he built at a similar class in Rhode Island, on the Lieutenant River in Old Lyme, Connecticut. 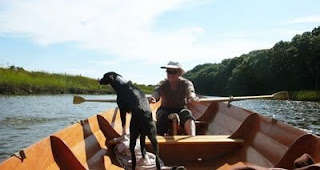 Posted by Chris Partridge at 21:52

My kit for this dory arrived today, and I will build it over this winter. I got a chance to test one at the Port Townsend Wooden Boat Festival. I was concerned about the stability given the dory shape's tippy reputation, but found it to be very enjoyable and stable. I cant wait to splash it in Boston Harbor next spring!

Hi Tim, thanks for getting in touch. Do let us know how the build progresses, and especially how the boat performs when you get out in the spring. Very envious about your home waters....
Chris